Hashtag Analysis: #DelhiRiots and the ignition of virtual communal war. 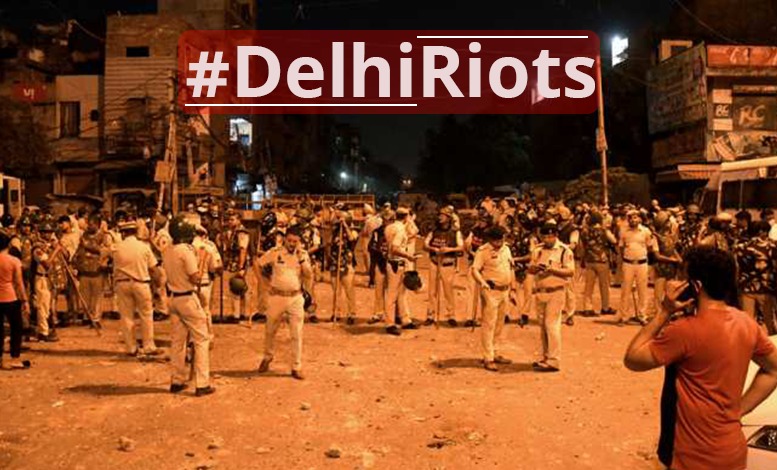 In totality from 2nd April to 18th April i.e. in 15 days, riots occurred in different parts of India in a very similar manner from Rajasthan, karauli to Delhi, Jahangirpuri.

On 16th April at the auspicious occasion of Hanuman Jayanti, the area of Jahangirpuri witnessed the Hindu- Muslim riots in which 9 people including 8 policemen were injured.

On this issue, the police have now arrested 25 people and apprehended 2 juveniles while one of the arrested person’s relatives was bound down for injuring a police Inspector by pelting stones at him.

The background story of #DelhiRiots:

On the evening of 16th April in Delhi’s Jahangirpuri, a Hanuman Jayanti procession was being carried out in the presence of police, as soon as the procession reached Kushal Cinema Hall, a clash broke out between two communities. Soon after this clash escalated and stone-pelting began from both sides.

Soon this news gathered the attention of entire social media, which turned this violence into virtual violence between two communities. Many hashtags were trending on Twitter under this issue.

The first and main amongst them was the #DelhiRiots:

Under this hashtag, most posts included the communal differences between both the communities, where on one side people are supporting the BJP(Bharatiya Janta Party) for taking care of Hindus, on the other hand, people are also anti-BJP as can be seen in the links below:

Under this hashtag a narrative was built that Hindus cannot celebrate their festivals, even after living in their own country. We noticed that most of the posts under this hashtag were in pictorial form for a clearer understanding.

In the midst of all hashtags a new hashtag to come into play to attain more attraction from the users, not only residing in India but people of other countries too.

The entire issue of Sweden riots where More than 40 people have been arrested after violent clashes in Sweden between police and people angry at plans by a far-right group to burn copies of the Quran is now being attached to delhiriots.

The graphical representation of which is shown below:

The graph depicting the hashtags mostly used in the tweets. Apart from the trending hashtags of #DelhiRiots, #जहांगीरपुरी, other hashtags that were used includes, #delhiriots2022 #delhi #jahangirpuri #hindusunderattackinindia, etc. 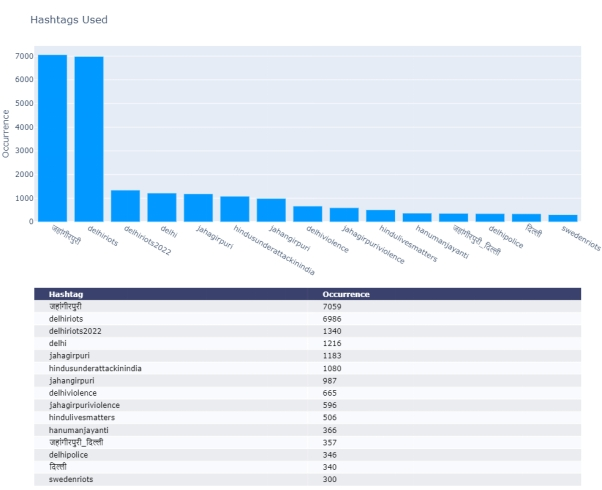 The below graph tells about the timeline of the hashtags #DelhiRiots, #जहांगीरपुरी. As it shows the hashtags started from 16th April 2022 and were on the peak on 18th April with almost 5,000 tweets and 676 replies on the hashtags and then decreased gradually. 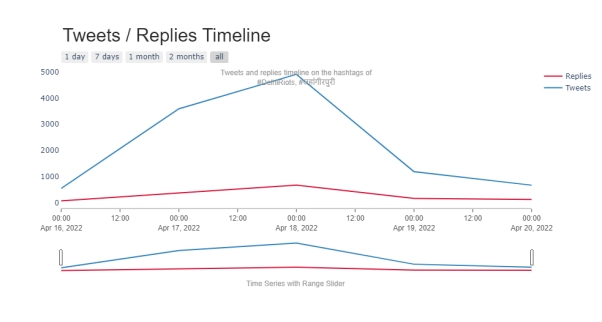 Apart from the various hashtags that were used on twitter to attract maximum attraction. Many fake and misleading news too paved its way into it. Both communities spread the news with certainty. We at DFRAC have covered many news related to #DelhiRiots.

Fact Check 1: Did the Muslims thrash the policeman in Delhi Riots?

A picture is shared on social media platforms claiming that the policeman is thrashed by the Muslim mob in an ongoing protest.

How many time we have to see this? #DelhiRiots #Jahangirpuri reads the caption.

how many time we have to see this?#DelhiRiots #Jahangirpuri pic.twitter.com/xmQkL0hihI

Another user writes, “How many time we have to see this? #DelhiRiots #Jahangirpuri

Kejruddin said that the central government should control the riot. it is not my business. Ashok Gehlot is also saying the same thing. So why become CM, resign, did Yogiji and Mamaji ever say this? walks straight #buldozer.(translates Hindi)

To find the authenticity of the image we reverse search the image using several keywords. We found that the same picture was posted by many news sites under various headlines. As this picture was from the protest in Ahmedabad amid CAA. 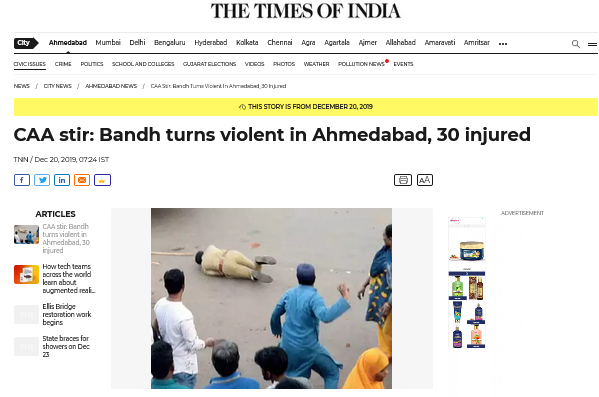 Hence, the picture is of old riot from CAA-NRC.

Fact Check 2: Reality of the Video Which Got Viral After the Delhi Riots On Hanuman Jayanti.

A video of a procession is getting viral on the internet where people are asking for stricter police action after the Delhi riots. Further, along with the video, Manoj Parihar asked for a bulldozer baba in Delhi in the caption.

Similarly, many people have shared this video on their social media handle.

On reverse image search, we found the same video on YouTube on the channel of Local Walk. The video was uploaded on 23th December, 2019 with the caption, “Support to CAA.”

Therefore, the video is old and have no relation with the ongoing communal riots.Further, digging deeper into the matter we found out that the video is not of Jahangirpuri but it is of Laxminagar.

Moreover, we found the same video on the Twitter handle of @jawaharyadavbjp. He posted the video on 26th December, 2019 with the caption, “The rally in Haryana is slightly different from the rallies in the country. “Modi ji, you play the stick, we are with you.”

Therefore, the viral video is old. And, the claim that this video is related to the recent communal violence in Delhi’s Jahangirpuri is wrong.

Many more fake and misleading news was covered by DFRAC on same incident.

Simultaneous, to all the fake and misleading there were many users on twitter from both the communities that used this hashtag to spread hate and meet their agenda to spread hatred among the two community and giving fuel to the incident.

Below is the graph depicting the users who were mostly mentioned in the tweets containing the hashtags of Delhi riots, some of the top accounts includes, @AmitShah was mostly mentioned with more than 620 tags followed by @DelhiPolice and @ArvindKejriwal with 415 and 390 mentions. @narendramodi and @hmoindia was also tagged with 266 and 183 times respectively. 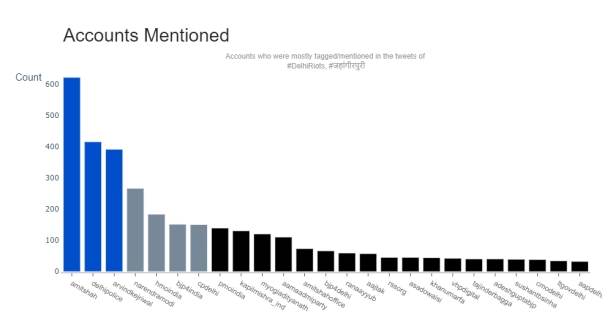 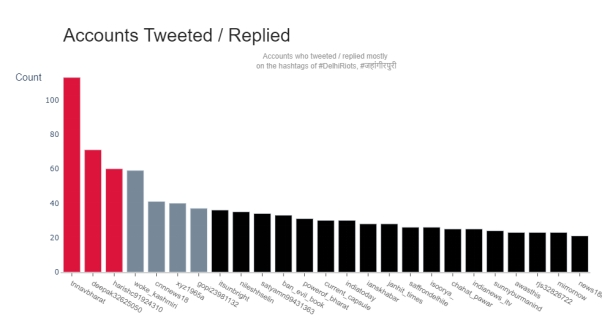 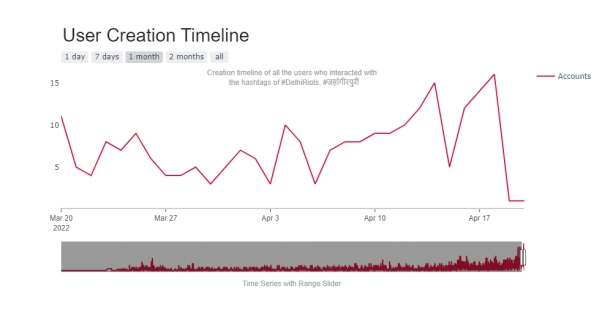 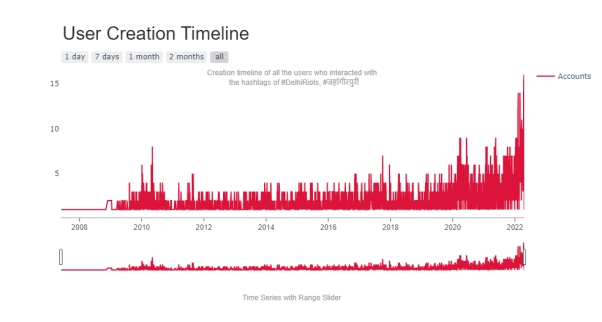 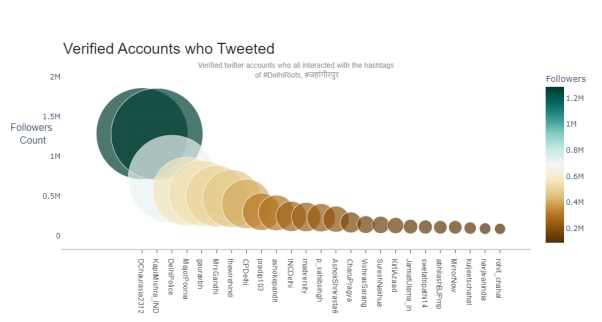 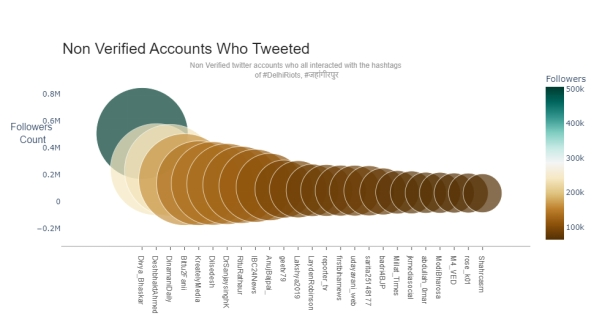 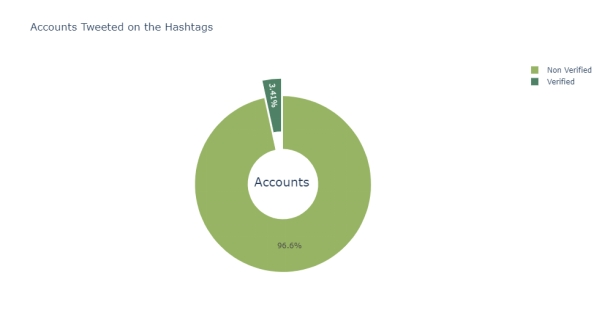 Below is the wordcloud which consist of words which were majorly used in the tweets containing these hashtags. Some of the words which were mostly used includes, “Delhi”, “Police”, “Hindu”, “Muslim”, “Stone”, “Pelting”, “Riots”, “Violence”, “Jahangirpuri”, etc. 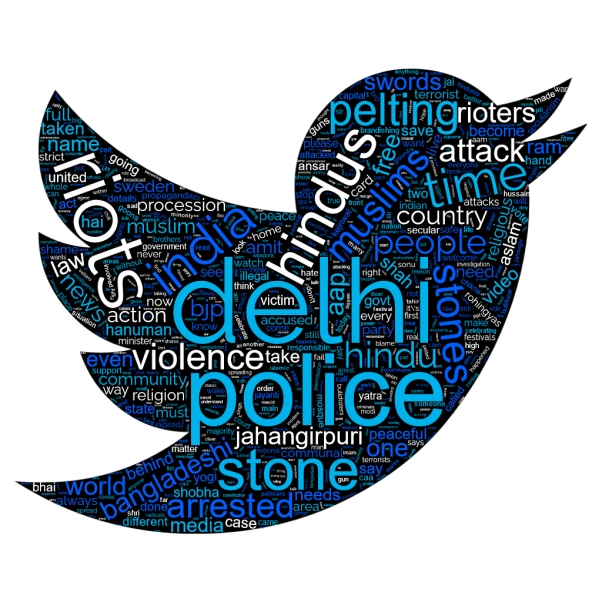 We witnessed a lot of fake, misleading and hate content going all around the internet in the name of #DelhiRiots. Most people from both the communities have shown their involvement in this virtual fight. We at DFRAC have presented before you the main scenario of whole #DelhiRiots for a better understanding of how it worked.