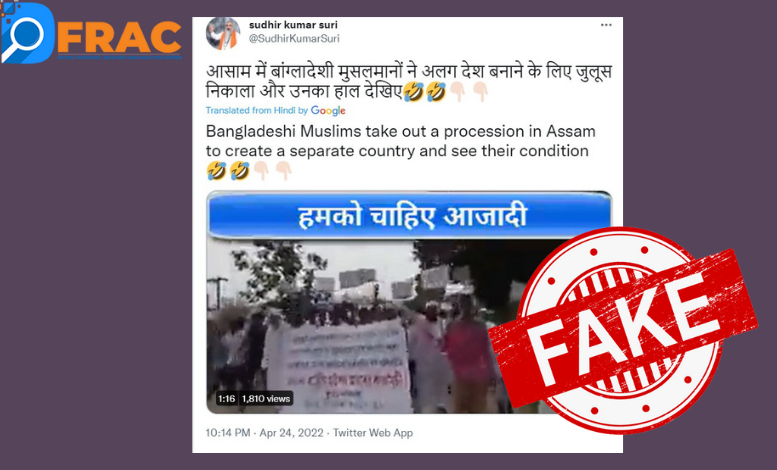 A video of a procession is getting viral on the internet. Sharing the video people are claiming that the video of a protest in Assam where Muslims from Bangladesh are demanding a separate country. Further, sharing the image @SudhirKumarSuri wrote the caption which nearly translates into English, “Bangladeshi Muslims take out a procession in Assam to create a separate country and see their condition.”

Similarly, many other users have shared the same picture with many mocking comments.

On reverse image search of some screenshots taken from the video, we found the same video on the Twitter handle of @Sourabh3507. He uploaded this video on June 9, 2021, with the caption, “Hindu Hriday Samrat Hemant Biswa Sarma, the Chief Minister of Assam, the most respected Assam Chief Minister, reprimanded the Bangladeshi’s health. why??? Watch the video to know.”

After that, our team found that this video was being circulated since 2017. Moreover, we found a report of newsclick in which the same picture was used with the heading , ” Muslim Youth Killed in Police Firing in Assam’s Goalpara.”

Both the picture are of the same incidence. Therefore, the claim regarding the video is fake. The video is people protesting in Goalpara, Assam against the ‘doubtful citizens and voters’ tag imposed by the government. And, a Muslim Youth was killed in alleged police firing during the protest.

Hence, it is clear that users are spreading an old video with a false claim.

Previous articleFact Check The Reality Of The Image Claiming 25 Students Of Allahabad University Got Arrested For Making Bomb.
Next articleHashtag Analysis: #DelhiRiots and the ignition of virtual communal war.