Fact-Check: Twitterverse claims only Hindu temples pay taxes in India. Is it true? 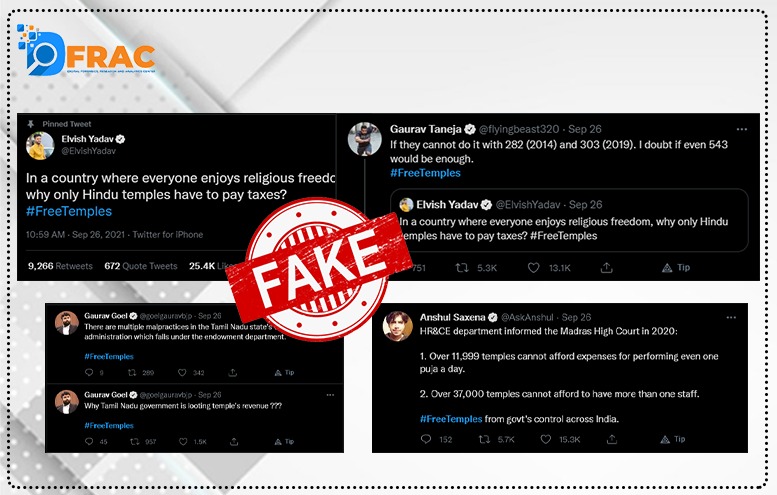 On September 26,2021, several verified blue-ticked accounts on Twitter started to use the hashtag #FreeTemples to vocalize their contempt on the issue of temple taxes in India. They claimed that only Hindu temples in India have to pay taxes whereas the same does not apply to churches and mosques.

Under the Goods and Services Tax provision, any entity making an average turnover of over 40 Lakhs (barring Telangana) must register themselves under GST. And as per the Central Board of Indirect Taxes and Customs, no religious body is exempt from paying taxes if they meet that criteria. There are some exemptions that do apply to all religions. Since many religious sites are managed by trusts and they do conduct various other activities apart from existing simply as a religious site, the tax applies to them all. In order to avail tax benefits, the trust must be registered under Section 12AA of the Income Tax Act, 1961 if they provide charitable services.

This claim was previously brought up in 2017 when BJP leader Subramanian Swamy raised questions against temples only being the ones to pay taxes.

Since the claim was also going viral then, the Finance Ministry of of India issued a press release to clarify the same back in 2017.

Since the claim has been previously addressed by the authorities, this claim still continues to be fake.