FactCheck: Did Rahul Gandhi Cropped The Tibetan Flag In His Post. Know The Truth 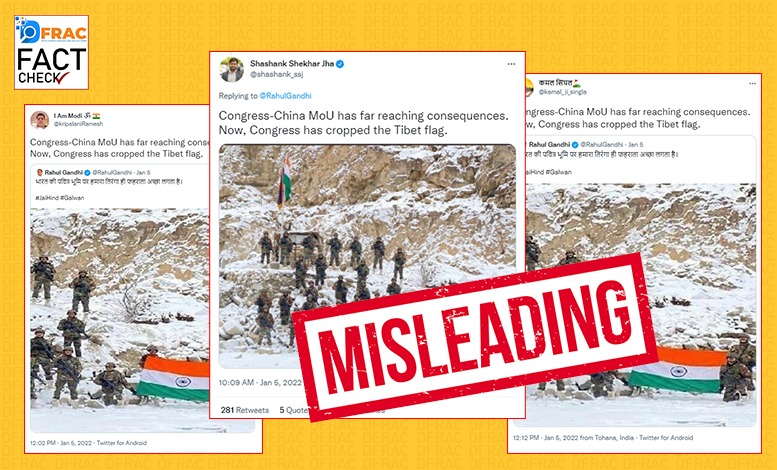 Recently, Rahul Gandhi has posted a picture on his official Twitter account of soldiers hoisting flag in Galwan Valley. Along with the post, he wrote that “It feels good to hoist our tricolor on the holy land of India.”

As usual INC Vice President’s this post also became a matter of controversy. A verified user named Shashank Shekhar Jha, who is a supreme court Advocate, as written in his bio. He yet again posted a mocking post on Rahul Gandhi claiming that “Congress-China MoU has far reaching consequences. Now, Congress has cropped the Tibet flag.” 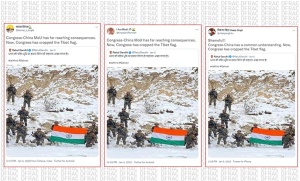 Also Read: The Truth Behind Viral Video Of A Burqa Woman Firing A Gun

On our fact Check analysis we found that Rahul Gandhi has posted a cropped photo. In the actual picture along with the Indian flag there is  the Flag of Dogra Regiment.

Seeing the above picture we can easily differentiate between Dogra Regiment Flag and Tibetan Flag. We can see the the Tiger on the flag of Dogra regiment, which is  considered the mount of Goddess Durga, the deity of the Dogra Rajputs. Also, we can clearly see the Six red bands spread across the dark blue sky represent the original ancestors of the Tibetan people: the six tribes called Se, Mu, Dong, Tong, Dru, and Ra which in turn gave rise to the (twelve) descendants.

Further, We also found a Post of ANI with the caption, “The flag flying next to the Indian flag is that of the Dogra regiment which is deployed there.”

The flag flying next to the Indian flag is that of the Dogra regiment which is deployed there.

Moreover, We also found a report of Times Of India in which it is clearly mentioned that this is the Flag of Dogra Regiment of our Indian Army.

Hence, the claim made by Shashank Shekhar Jha and other users is totally baseless and misleading.