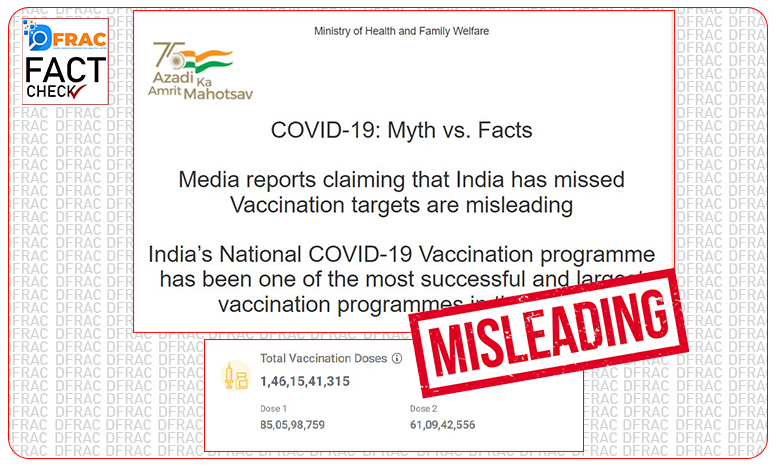 02 JAN 2022 3:26PM, Government of India did a press release slamming the claims made by reputed media reports.

In the press release GOI stated that- “In a recently published news article by a reputed international news agency, it has been claimed that India has missed its vaccination target. This is misleading and does not represent the complete picture.”

In the fight against global pandemic COVID-19, India’s national COVID-19 Vaccination programme has been one of the most successful and largest vaccination programmes compared with the many developed western nations with significantly low population base to vaccinate.

Compared with other developed nations, India has done a better job in administering COVID vaccination to its eligible adult citizens of 93.7 crore (as per RGI) across all its States and UTs.

A quick comparison with developed nations on their vaccination is as follows:

A nation-wide COVID-19 vaccination campaign Har Ghar Dastak campaign was implemented from 3rd Nov 2021 which includes mobilization, awareness, vaccination campaign through reaching out to all missed out and dropped out eligible beneficiaries through House to House visit. This has also resulted in an increase of 1st dose coverage by 11.6% since introduction of the campaign. While the 2nd dose coverage increased by 28.9% in the same period.

Keeping in view the global surge of COVID-19 cases in December 2021, detection of Omicron variant which has been categorized’ as a Variant of Concern (VOC), scientific evidence, global best practices and the inputs/suggestions of “COVID-19 Working Group” of “National Technical Advisory Group on Immunization (NTAGI)” as well as of “Standing Technical Scientific Committee (STSC)” of NTAGI it was decided to further refine the scientific prioritization & coverage of COVID-19 vaccination of teenagers in the age-group of 15-18 years to be started from 3rd January 2022.

Further strengthening India’s fight against COVID-19, the Central Drugs Standard Control Organisation (CDSCO). Ministry of Health and Family Welfare has given approvals to two additional vaccines in December 2021. These include Biological-E’s CORBEVAX vaccine and SII’s COVOVAX vaccine for restricted use in emergency situation. This takes the number of vaccines given restricted use in emergency situation in India to 8.

Firstly, in our factcheck analysis our team tried to find our the sources of the media reports which claimed that, India has missed Vaccination targets. Consequently, we found a report of BBC NEWS published on 31st December, 2021 with the heading- Covid-19: How India missed its vaccination target.

This article took the reference of statement made by Union Minister Prakash Javedkar.The target was first announced by Prakash Javadekar in May, who was a minister in the federal government at the time. He stated that “Vaccination in India will be completed by December 2021,”

Secondly, we dig into the reality of Prakash Javedkar’s statement. As a result, we found a video of Indian Today on YouTube.

In this video, We can hear Mr. Prakash Javedkar saying that Government has planned out the way of giving 108 crore people till December end . In May 2021, Health Ministry estimated that 216 crores doses are likely to be available between August and December. That’s why, the target of was set that before December 2021, to fully vaccinate more than 70% of people  But later, in June GOI filed an affidavit before the Supreme court. In the Affidavit GOI said that only 135 crores doses of Covid-19 is will be available by the end of Dec, 2021 staggering difference of 81 crores doses.

As per the above reports, we can see the number of people who are fully vaccinated in different countries.