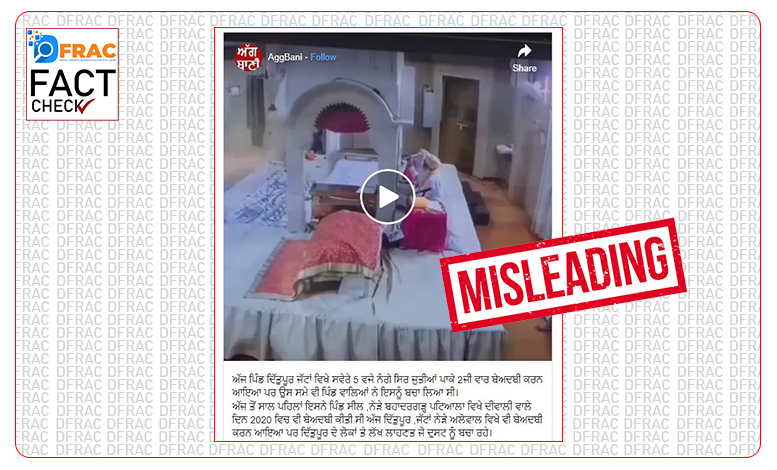 A video of Gurdwara Sahib is going viral on social media. In which a man can be seen entering the gurdwara purportedly wearing shoes and without covering his head.

In the description of this video posted in Punjabi language, it is written that today at 5 am in village Dittupur Jattan he came wearing shoes for the second time but still the villagers saved him. A year ago, he had committed such indecency on Diwali in 2020 in Seal village near Bahadurgarh, Patiala.

Upon checking the above video, we found a video news report aired on YouTube channel ‘Dainik Savera’ on October 05, 2021. In which the person seen in the video is shown being arrested and presented in the court.

Apart from this, a similar picture was also found in a report published by ‘Punjabi Jagran’ on October 03, 2021. It was told in the report that a person from the village tried to desecrate the Guru Granth Sahib at around 5.30 am in Dittupur Jattan village of Bhadson police station. According to the villagers, the youth was identified as Jagdeep Singh, son of Gajan Singh. Bhadson police station chief Sukhdev Singh said that on the complaint of Gurdwara, a case was registered against the accused under section 295A and section 380 of IPC and arrested. It was told in the report that Jagdeep Singh is a mental patient and in the past due to cancer, he had amputated one hand. So it is clear that the above video is from October. Which has now been shared with a misleading and false claim.

So it is clear that the above video is from October. Which has now been shared with a misleading and false claim.