FactCheck: “Crime in UP Is Declining” said Amit Shah. Know The Reality 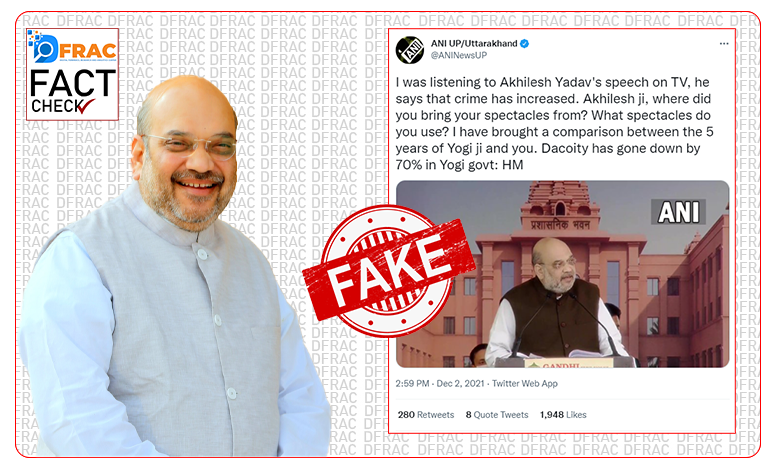 In the heat of assembly elections of five states of the country including UP, the election campaign has intensified. In view of this, the Government had laid  foundation of many schemes in the state. Moreover, they also inaugurated many completed projects.

Consequently, on December 3, the Home Minister of the country, Amit Shah, laid the foundation stone of Maa Shakumbhari University in Saharanpur.On this occasion, BJP leader Amit Shah claimed that there has been tremendous progress in law and order and women’s security situation in UP in the last five years. The Home Minister claimed that there has been a decline in the crime figures in UP under Yogi Raj.

Amit Shah said in his speech, “Actually, the crime rate has come down by about 60 percent during the tenure of the Yogi government. I have statistics which are themselves testifying to this.” Giving the figures, he said, “I have brought a comparative study of five years tenure of Yogi ji and Akhilesh Yadav. There has been a 70 percent reduction in dacoity in the Yogi government. Decline in the incidents of robbery on gunpoint was 69 percent. There has been a 30% drop in the murder cases. A  reduction of 22.5% were registered in dowry deaths.”

We investigated the truth of crime statistics since Yogi Adityanath took the oath as the Chief Minister of UP in March 2017.

For our analysis we took the help of NCRB’s data. According to the NCRB, on March 15, 2012, when Akhilesh Yadav took oath as the Chief Minister of UP, there were a total of 1,98,093 cases of cognizable offenses under the Indian Penal Code (IPC) in the state and the crime rate was 96.4 per cent.

The crime rate continued to rise till 2017 and had risen to 139.3% by the time the BJP came to power. At that time the number of cases registered under the Indian Penal Code in the state had increased to 3,10,084.

While UP recorded an increase in cognizable crimes, there has been some improvement in serious crimes like murder. Looking at the statistics of murders in UP, the difference is clearly visible. In 2012,State registered 4966 murder cases, which increased to 5,047 in 2013, and increased to 5,150 in 2014. In 2015, it saw a decline and these figures came down to 4,732. Though these cases registered a partial increase in 2016 to 4,889, the trend of decline has started since 2015.

We can see a similar trend in the data of robbery. The first two years of the Akhilesh government saw the highest number of dacoities, while it started declining from 2014 onwards.

Even in the Yogi government, the figures of dacoity continued to decline. According to the 2017 data, Sate registered 263 cases of dacoity, while in 2018 it came down to 144. In the next two years i.e. 2019 and 2020, this figure was 120. Comparing the average cases of dacoity registered during the tenure of both the governments, we get to see a decline since 2013. According to Newschecker, a fake check website, this fall is 54 percent unlike Amit Shah’s claim of 70 percent fall.

Fourth Claim And The Reality

Contrary to the claims of Union Home Minister Amit Shah, there has been a steady increase in dowry murder cases in UP. While the crime rate of dowry death was 2.3 per cent with 2,244 cases in 2012, the cases increased to 2,524 in 2017 and the crime rate was also recorded at 2.4 per cent. In the year 2020 i.e. pandemic year, 2,274 cases were registered and the crime rate of dowry death was 2.1 percent. In such a situation, it is clear that against BJP leader Amit Shah’s claim of decline of 22.5 percent in Yogi Raj in UP, an increase of 1.73 percent has been registered.

The truth of the claims made by Union Home Minister Amit Shah in Uttar Pradesh is completely opposite. Instead of decling by 60 percent, the total cognizable offenses (IPC) in UP has increased by 43 percent. Similarly, the cases of dacoity have come down by 54 per cent and not by 70 per cent. Similarly, there was a reduction of 19.67 per cent in murder cases and not by 30 per cent. And finally, there has been an increase of 1.73 percent, not a decrease of 22.5% in dowry deaths.