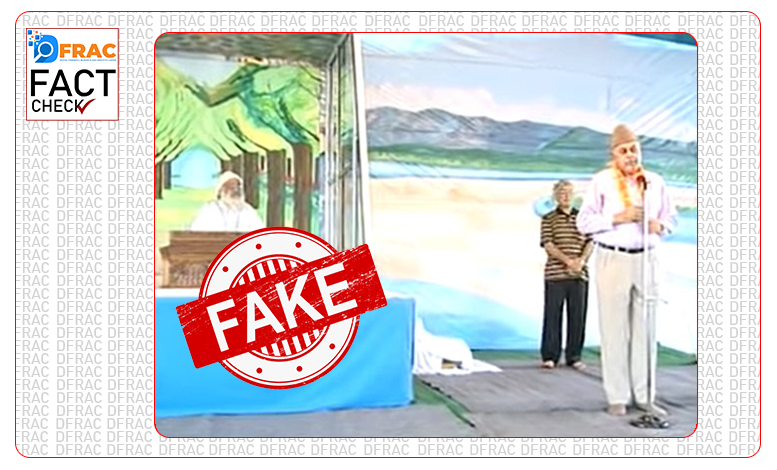 Jammu and Kashmir has always been a burning issue. Events happening here have a great impact on the national scale and attract the attention of the people. The present central government removed Article 370 found in the Constitution of Jammu and Kashmir by amending it. Since then the issue of Kashmir has been in more headlines. At the same time, the leaders of Kashmir, who are called Gupkar organization, also remain in a lot of discussion. Among these leaders are former CM Farooq Abdullah, his son and former CM Omar Abdullah and former CM Mehbooba Mufti. These leaders remain in the media headlines due to their statements. A video of Farooq Abdullah is becoming increasingly viral on social media. It can be seen in this video that he is singing a bhajan. Social media users are claiming that Farooq Abdullah has changed after the abrogation of Article 370 from Kashmir and he has now started singing bhajans in public forums.

On reverse searching some frames of the video, we found that this video is true of Farooq Abdullah and he has also sung the hymn. But this video of singing hymns is old, not after the removal of Section 370. Nalin Bhat uploaded this video on YouTube on 11 February 2018. In which he is singing bhajans in Asaram Bapu’s satsang.

On the other hand, on doing some more searching, we found that this video was uploaded on YouTube named Satsangarmit in 2009. Whose description claims that this video is from 2001.

Hence, the claim by social media users of Farooq Abdullah singing hymns after the abrogation of Article 370 is false and misleading. Social media users are posting this 2001 video after 20 years i.e. in 2021 under a propaganda.