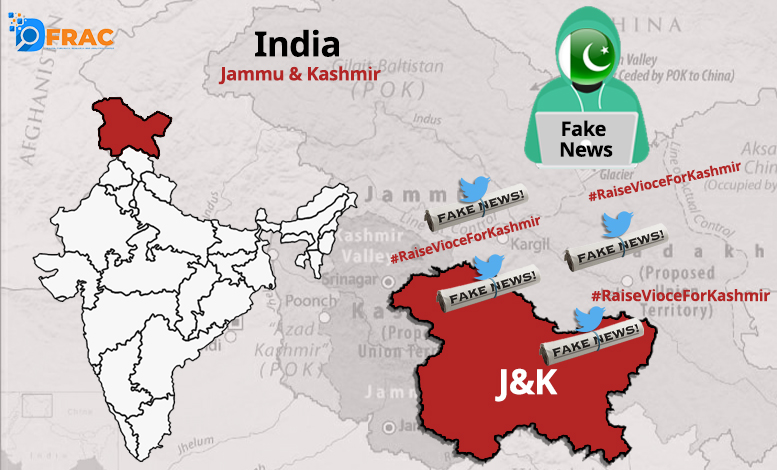 Jammu and Kashmir is integral part of India. Also, the events and issues of Kashmir are our internal matter. But the impact of these events is wide-ranging. Likewise, we can see the influence across the border in Pakistan and even across the seven seas. After the abrogation of Article 370, the eyes of the world have become sharper on the events of Kashmir. Every incident here remains in the headlines of the international media also.

Whatever may be the reality of the disputes on Kashmir, there are a lot of propaganda here too. These are widely published and broadcast from our neighbor, Pakistan. There are many misleading posts on the social media about Kashmir, which have nothing to do with the truth. There is a report done by our team in the past as well, where we have exposed these Pakistani propaganda.

In this report, we will investigate the fake images, fake incidents, factual claims and misleading materials used by Pakistan and its social media users regarding Kashmir and put the truth about it in front of our readers. In our analysis, we will also reveal those who promote Pakistan’s hate agenda on Kashmir and propagate and circulate it on social media.

Naveed Nomi is a Pakistani user on Twitter. He has put the flag of Pakistan in his name itself and wrote in his bio that he is a resident of Punjab province of Pakistan. Furthermore, Nomi has posted a photo along with the hashtag #RaiseVioceForKashmir. In this photo some people are sitting on the side of the road in injured and sick condition. He claimed that this photo is of Kashmir.

On our investigation of the claim made by Naveed Nomi on Twitter. We found that this video is from Visakhapatnam, Andhra Pradesh. Where due to gas leak thousands of people got sick. According to the news published by Navbharat Times on 7 May 2020, more than five thousand people got sick due to the gas leak in Visakhapatnam. In this regard, we can also see a video of News Nation of 7 May 2020. Hence, Naveed Nomi’s claim is false and misleading.

Several Twitter handles of Pakistan posted a picture of India. In this photo, Police is lathi-charging on some students and girls protesters. Pakistani social media users have claimed that this photo is from Kashmir and that the Kashmiri police is lathi-charging these Kashmiri students. While sharing this photo, a user wrote- “#RaiseVioceForKashmir For many years Indian rulers have ordered the Indian Army to torture those Kashmiris who have not accepted India. Kashmiri will be martyred but will not trust India.”

When our team investigated the claims made by Pakistani social media users, the truth came out. Our team found in its investigation that the photo posted by Pakistanis is false and misleading. The photo used by Pakistani users is not from Kashmir but from New Delhi, the capital of India. This photo is of the protest by the students after the Nirbhaya gang rape in 2012. In this protest, the police lathi-charged the students.

Pakistani social media users are sharing a photo. In this photo, some policemen are dragging a woman away. Pakistani users are claiming that this girl is Kashmiri. They claimed that two years after the abrogation of Article 370, when Kashmiris protested, the police are harassing them.

Our team investigated this photo of Pakistani users and their claims. A reverse image search of the photo on Google revealed that this picture is from India, but this picture is not from Kashmir. However, this image is from Andhra Pradesh, where people were protesting against the closure of social welfare hostels. Official Twitter handle of CPI(M) posted this photo. According to which the police brutally used force on the students of SFI.

This fact check proves that this photo is not from Kashmir but from Andhra Pradesh. Using this photo, Pakistani social media users are setting an anti-India agenda. 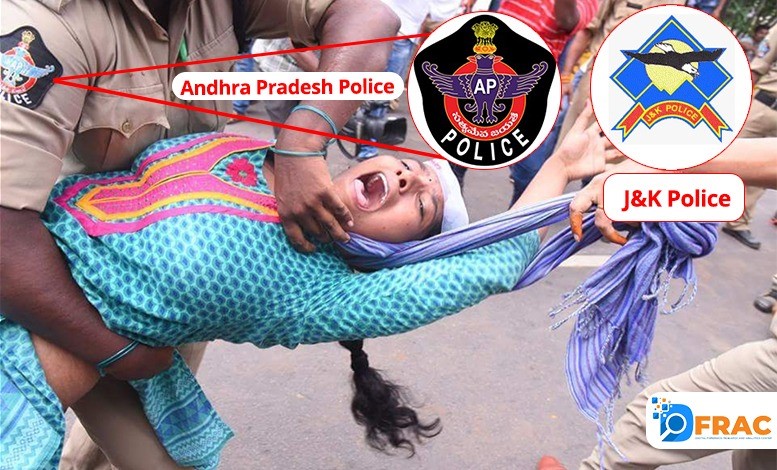 In this photo we can see that Andhra Pradesh Police on the badge of the shoulder of the lady policeman. Apart from this, for your information, we have also put the badge of Jammu and Kashmir Police in the photo. As a matter of fact, the police of different states in India have different logos and badges.

Pakistani users were posting fake photos and videos against India with several hashtags on Twitter. The most used of these hashtags was #RaiseVioceForKashmir, which was posted more than 500 times. This is followed by the hashtags #Kashmir, #kashmirRejectsIndia and #India_terrorist, which were posted by Pakistani users. The graph below provides a detailed analysis of hashtags used by Pakistani social media users. 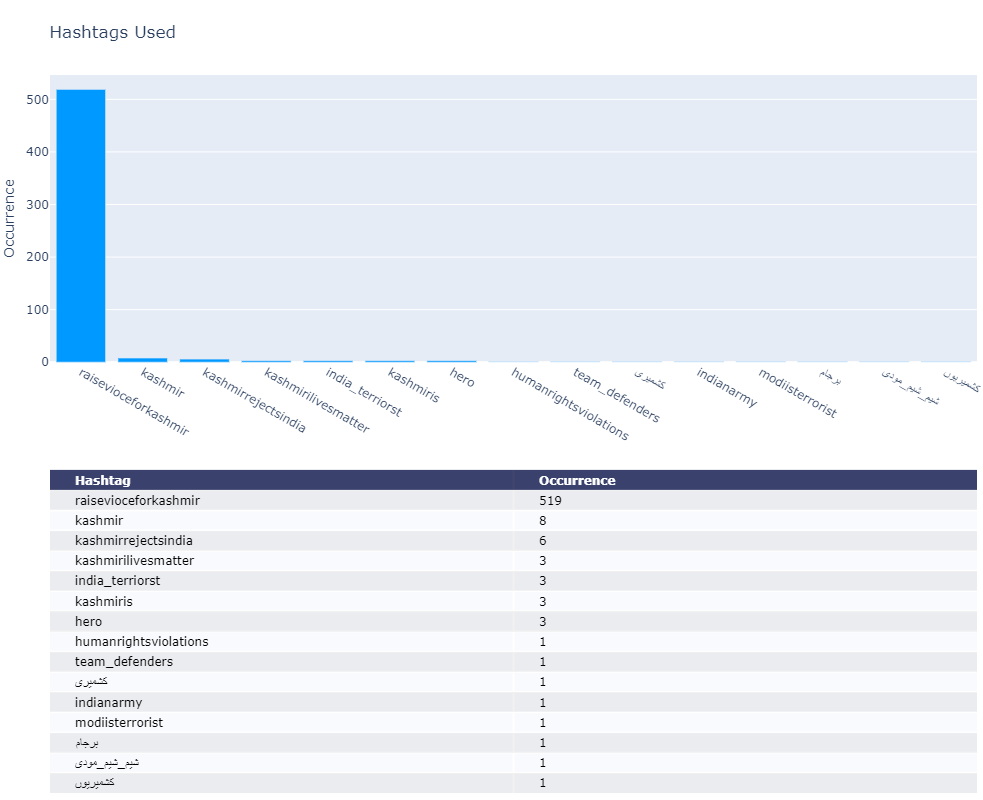 Use of the incorrect spelling of Voice “Vioce” in the hashtag:

Here let us tell our readers that the hashtag #RaiseVioceForKashmir trended by Pakistani social media users, has a spelling mistake. These social media accounts used the hashtag with the wrong spelling of Voice. By this we can understand how educated these Pakistani users are. The second thing emerged is that, they have copy-pasted this tag on a large scale. To make this hashtag viral, these hashtag were sent to people social media. Later on, people posted the same hashtag. 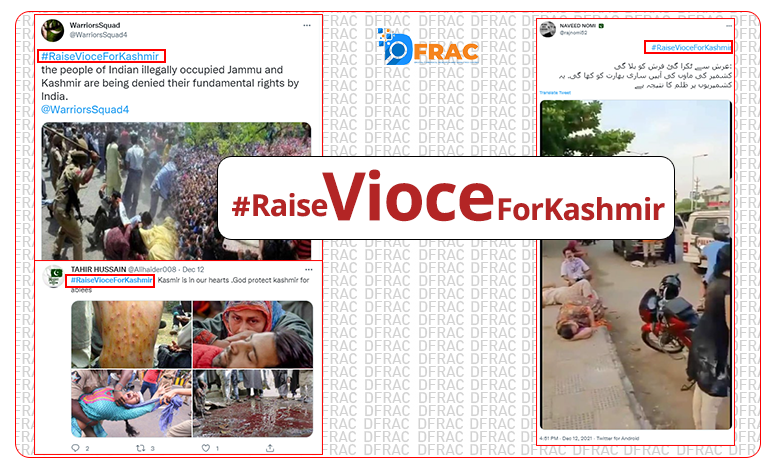 Here is a word Cloud of words of Pakistani users on Twitter. It shows the most frequently used words in their tweets. 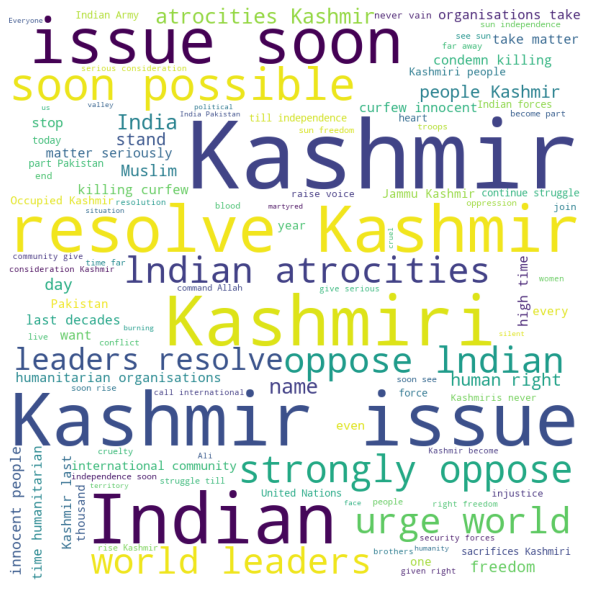 Many Pakistani user’s accounts were mentioned in the tweets made against India. Furthermore, users repeatedly mentioned those accounts. Mentioned accounts helps in checking the fact that theirs owners are the players who started these hashtags or run the Anti-India agenda.

The graph below shows the most mentioned accounts. This include @teamwpak_, who was tagged more than 180 times. For the time being this account is suspended. Besides, @WarriorsSquad4 and @HaroonRawal were tagged more than 40 and 25 times respectively. 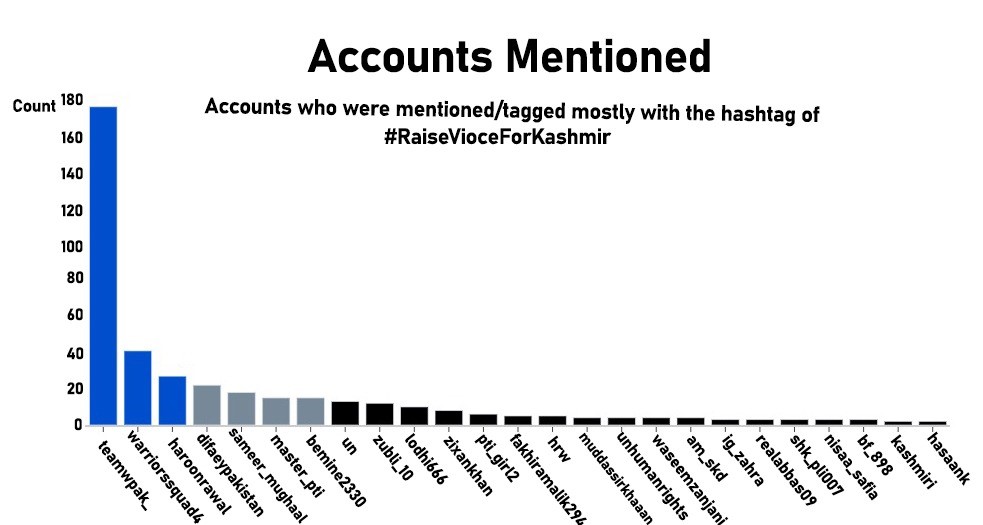 The graph below shows users who have tweeted or replied the most. @WarriorsSquad4 has tweeted over 40 times using this hashtag, followed by @Master_PTI about 40 times. Let us tell you that the head of the trending team is @TeamWPak_. 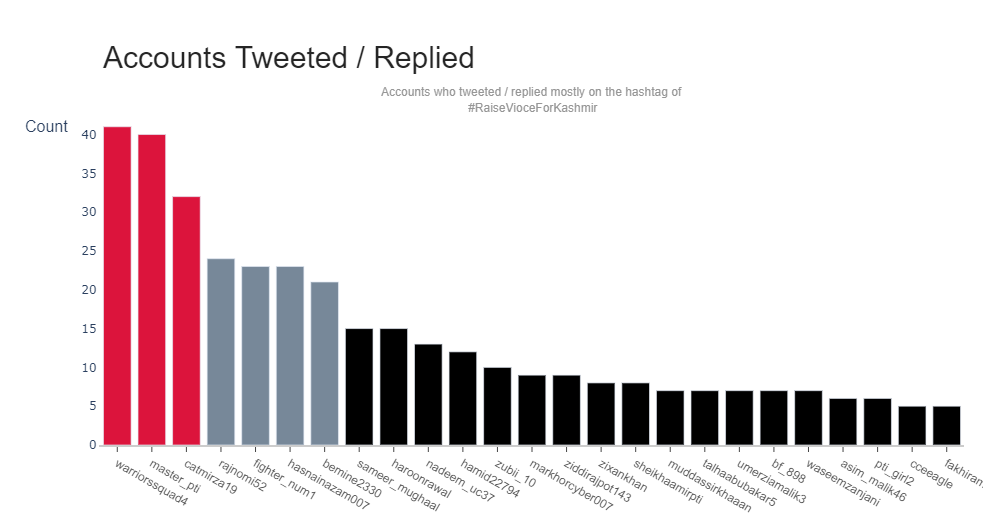 In this graph, we have examined the accounts that retweeted. @WarriorsSquad4 has retweeted the most 240 times, followed by @RukhsarQadir1 and @Bemine2330 with over 75 and 65 retweets respectively. The trend of this retweet shows that they were tweeting, retweeting and replying more and more to bring this hashtag in trend. 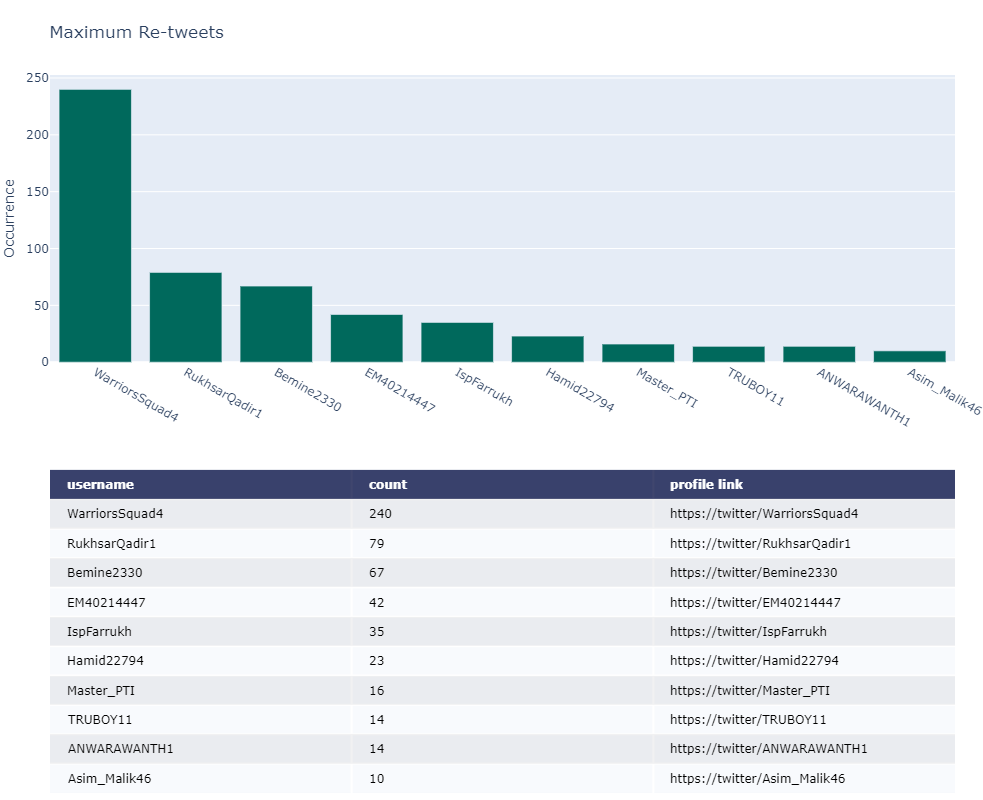 The graph below shows the major accounts involved in trending this hashtag. These same accounts tweeted, retweeted and replied using these hashtags. The main account of these is @MazharAbbasFan, which has more than 30,000 followers. Next is @AyazAmirFan, who has around 20,000 followers. @RealPahore account has over 13,000 followers. Apart from this, to trend this hashtag, we can see the involvement of many low-follower accounts. 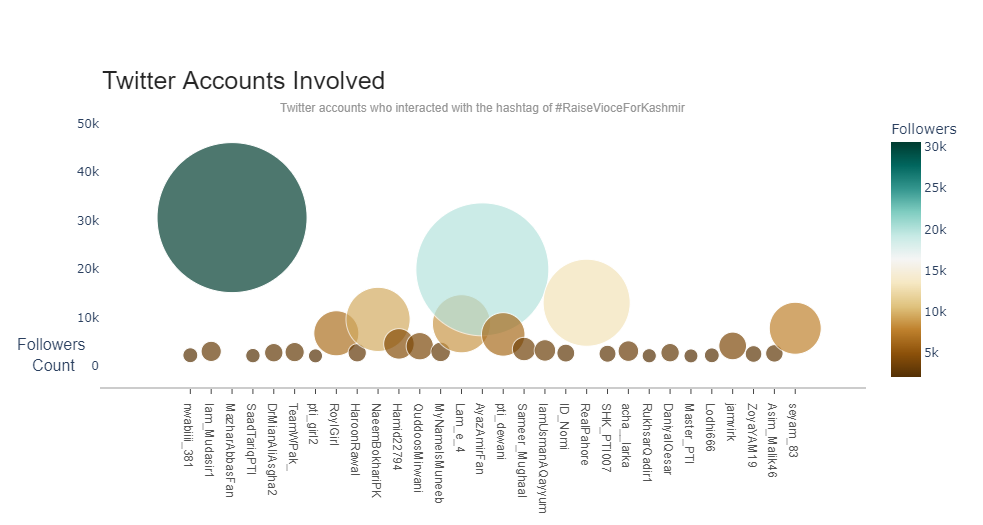 Our analysis reveals that Pakistani social media users have extensively used fake photos, factual news and misleading materials to drive an Anti-India agenda. Apart from this, Pakistani users has done copy-pasting on a large scale. Moreover, from this analysis our team also found that they were running the Anti-India agenda in order to influence the people of Kashmir and to mislead the Pakistani citizens.

Let us tell our readers that the effort of DFRAC is to expose misinformation and fake news on social media. Our effort is to bring the true news to our readers by checking the fake news. We have consistently exposed hate news, fake news and misleading content. We earnestly appeal to the readers not to fall in the trap of fake materials on social media. Secondly, search the reality of any viral trend before participating. Otherwise, it can become a problem for us.