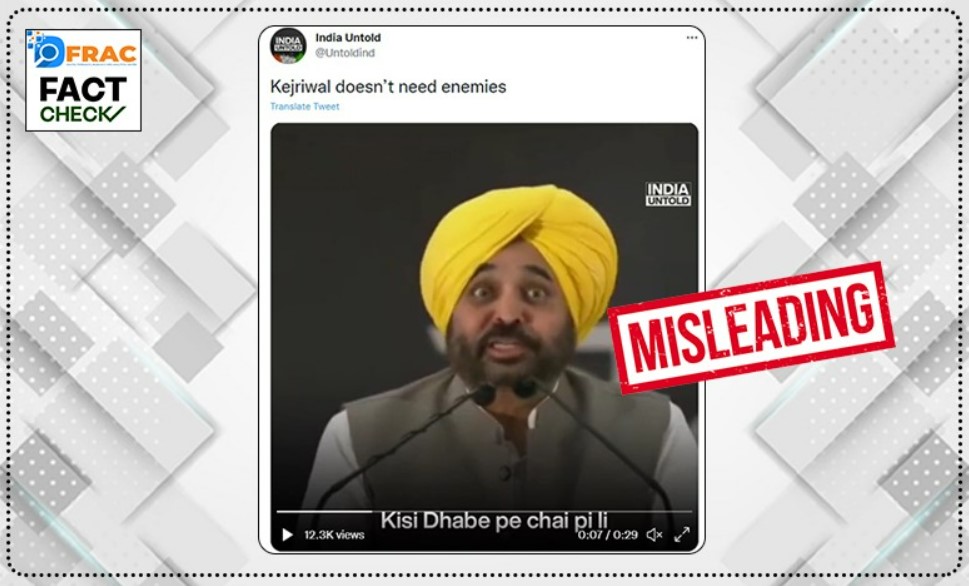 As Delhi’s Aam Aadmi Party is trying its best to increase its dominance in Punjab and is very active about the upcoming elections, a video on social media platform Twitter has got viral where it is seen Bhagwant Mann, the member of the parliament insulting the chief minister of Delhi, Arvind Kejriwal.

In this video the MP, Bhagwant Mann is found speaking in Punjabi which roughly translates into English – “Ever stopped the wedding car and gave an omen of hundred rupees. Sometimes he drank tea at the dhaba of Gyani, if the electric wire was found loose, he tightened it. Is this the job of the Chief Minister?”

This video has got over 12,000 views and over 210 retweets. Later in this video some images and videos have also been added to mock and insult Arvind Kejriwal.

After doing a reverse search analysis by our team we found out this video to be misleading. Bhagwant Mann wasn’t found talking about Arvind Kejriwal but Charanjit Singh Channi.

This video is of an event held in Punjab by Aam Aadmi Party which was live streamed on Oct 28, 2021. In this event both Arvind Kejriwal and Bhagwant Mann were present.

The part of the viral video can be seen from 1 hour and 1 minute.

It is clearly seen from the actual footage that Bhagwant Mann was talking about Punjab CM Charanjit Singh Channi and not Arvind Kejriwal.