Fact Check: Rs 350 will be deducted from your bank for not voting 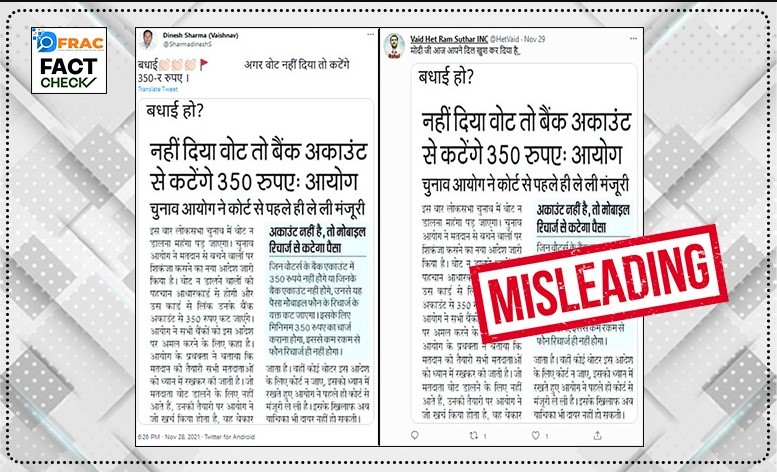 A newspaper clip is viral on social media since 28 Nov, 2021, on which it is written that “नहींदियावोटतोहबैंकअकाउंटसेकाटेंगे३५०रुपए”, which when translated means “If the vote is not given, then 350 rupees will be deducted from the bank account”.

Many Twitterati posted the viral newspaper clip. Some of the accounts are Vaid Het Ram Suthar INC andDinesh Sharma (Vaishnav).

On performing simple reverse image search of the above image, we came across a tweet of Spokesperson, Election Commission of India ,in which it is clearly specified that the above viral newspaper clip is fake.

#FakeNewsAlert
It has come to our notice that the following fake news is again being circulated in some whats app groups and social media. @PIBFactCheck https://t.co/FEtIhgzJ7N pic.twitter.com/UVPpoDqOHh

Hence, the viral newspaper clip that Rs 350 would be deducted from the bank account, if vote is not given is fake and misleading.