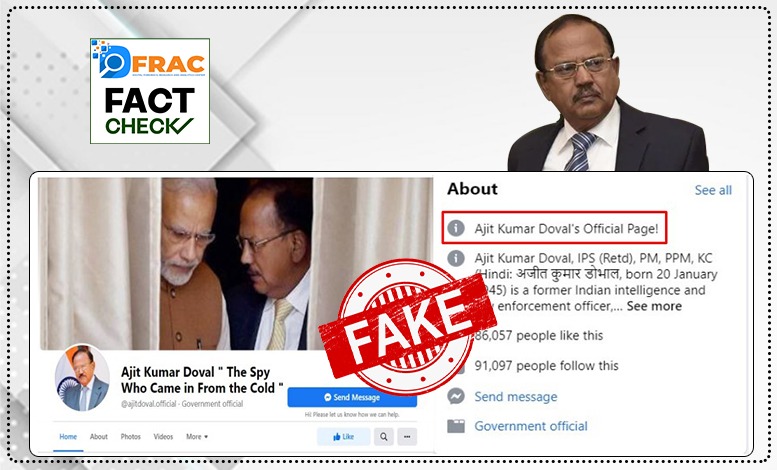 Many accounts are running on social media in the name of National Security Advisor of India Ajit Kumar Doval. Some of which have claimed to be official. Although the posts made by him are of low level.

Our team investigated all the accounts on social media running in the name of  Ajit Doval. During this, many accounts were found in his name. Some of which were formed as fan clubs. His name and pictures were used in some accounts.

During this investigation, we also found an official account in his name. Which is running on Facebook under the name of Ajit Kumar Doval “The Spy Who Came in From the Cold”. In the bio of this account, the account is claimed to be official. Along with this, information related to Doval’s service was also given. The last post on this page was a Diwali greeting.

This page has 86,058 likes. Apart from this, 91,098 people follow the page. Besides this we found many other fan pages like Ajit Doval, Ajit Doval – For NSA, Ajit Doval Game Changer  and so on.

However, investigation found that National Security Advisor Ajit Kumar Doval does not have any official account on Facebook.

At the same time, the Indian Ministry of External Affairs recently issued a statement informing that “Important warning! Shri Ajit Kumar Doval KC, National Security Advisor does not have an official account on Facebook. This is an advisory to take precautions against fraudulent or fake accounts under his name”.

Apart from this, Foreign Ministry spokesperson Arindam Bagchi also issued a statement regarding the account on Twitter.

Shri Ajit Kumar Doval K.C., National Security Advisor has no official account on Twitter. This is to advise caution against impostor or fake accounts under his name.

Fact Check: Did Aaditya Thackeray have removed the word minister from his Twitter bio amid the political crisis in...