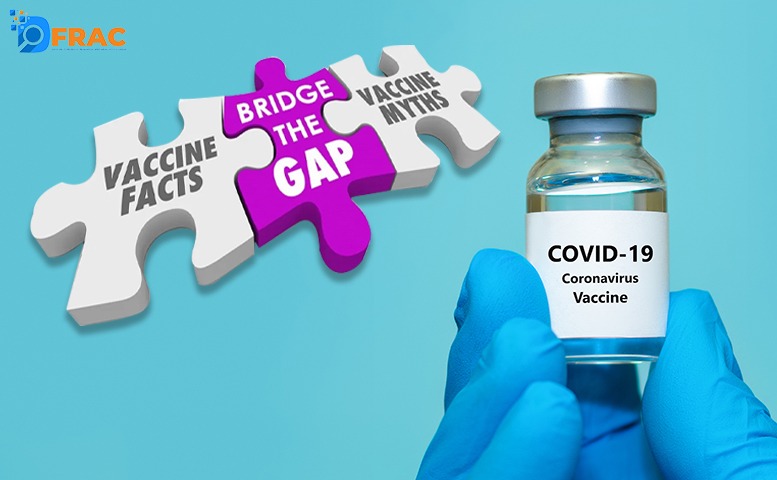 India has hit the 100-crore or one billion COVID vaccine landmark, but it has come with its fair share of logistic issues and misconceptions. While the Supreme Court had in May pulled up Modi government for the vaccine procurement policy that was a complete disaster in making. Later, the Centre changed its policy and thus began the journey of vaccinating the country’s vast population sans any major shortage. Apart from vaccine logistics, the other challenge that various governments and administration faced was to make people aware and make them agree to get vaccinated, especially in rural areas, where people till now are quite skeptical about taking a shot in the arm. A hoard of ANMs and anganwadi workers travelled to far reaching areas and convinced people to take the jab.
Still, various myths were spread about vaccination programme. These myths were being spread due to false statements, half-truths and openly told lies.
NITI Aayog and National Expert Group on Vaccine Management for COVID-19 (NEGVAC) were busy refuting myths that travelled far and wide through social media, WhatsApp etc.
There are a large number of people who are shying away from getting the vaccine due to myth or misconception. Experts say that there is no effective treatment for coronavirus (COVID-19) yet, but it is possible to prevent it to a great extent through vaccine. That’s why get the vaccine.
On the other hand, if we talk about other countries, 38 percent of the adult population in America has been vaccinated. After this, the compulsion of applying face mask there has also been abolished. In Britain, 75 percent of the adult population has had at least one dose of the vaccine. Israel has also vaccinated 60 percent of the adult population. After this, the situation in these countries has started improving to a large extent. But there are many such myths and misconceptions in India, due to which people are shying away from getting the vaccine.

Some of the major myths and facts:

The vaccine has been prepared in a very short time. So it is not safe

It is true that the corona virus vaccine has been prepared in a very short time. But that doesn’t mean it isn’t safe. In fact, strict rules and guidelines have been followed to approve the vaccine. Scientists have worked 24 hours a day to ensure its effectiveness. These vaccines have been tested in the laboratory. After this, its trials have been done on people. That’s why this vaccine is safe.

After getting the vaccine, its side effects are also visible

It is wrong to say that the immunity power is reduced by drinking alcohol after getting the vaccine. In fact, drinking too much alcohol causes liver and heart diseases. That’s why doctors recommend avoiding it. The general immunity in the body of heavy drinkers can be reduced. But it has nothing to do with the vaccine.

In women who are having periods, the vaccine reduces immunity

This too is completely wrong. There is no relationship between women’s periods and the effectiveness of the vaccine. Pregnant women are also getting the vaccine.

No need to get vaccine after corona is infected

Apart from these, there have been misconceptions regarding the central government too

The central government has eased the process of getting vaccines approved by US FDA, EMA, UK’s MHRA and Japan’s PMDA and WHO’s emergency use list in India in April this year itself. These vaccines will not need to undergo prior bridging tests. The provision has now been further amended to completely eliminate the testing requirement for well-tested and tested vaccines manufactured in other countries. No application from any foreign manufacturer for approval is pending with the Drug Controller.

Centre not doing enough to hike domestic production of vaccines

The central government has been playing the role of an effective facilitator to enable more companies to produce vaccines since the beginning of 2020. There is only 1 Indian company (Bharat Biotech) which had limited facility. The Government of India ensured that apart from expanding Bharat Biotech’s own plants, 3 other companies/plants started production of Covaxin, which has now increased from 1 to 4. Bharat Biotech increased the production of vaccine from 1 crore to 10 crore per month. In addition, the three PSUs will target to produce up to 4 crore doses by December. With the continuous encouragement of the Government, Serum Institute is increasing the Covishield production of 6.5 crore doses to 11.0 crore doses per month.

Till now no country in the world is giving vaccine to children below the age of 12 years. India, however, processes to trails for vaccinating both kids under the age of 2-12 years and 12-18 years are going on. However, with the conception of third wave and it affecting children more than adults, vaccination of children need speedy redressal. Having said that, the final decision has to be taken by scientists only after sufficient data is available on the basis of trials.