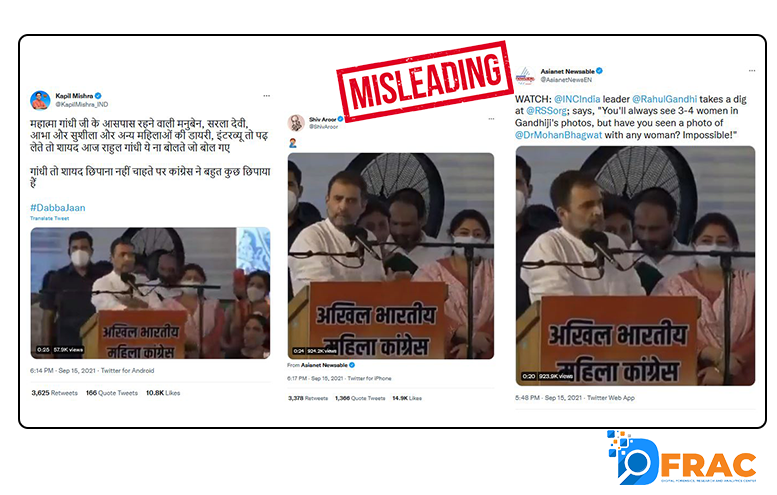 On September 15,2021, BJP worker Kapil Mishra posted a video of Rahul Gandhi giving a speech. In this video, Rahul Gandhi can be seen saying that “You must have seen in pictures of Gandhiji (Mahatma Gandhi) that he is photographed with three or four women. But have you seen a picture of Mohan Bhagwat with a woman? Have you? It’s impossible.”.

Kapil Mishra captioned the video,”Had he read the diaries, interviews, and interviews of Manuben, Sarla Devi, Abha and Sushila and other women who lived around Mahatma Gandhi, perhaps Rahul Gandhi would not have spoken today. Gandhi may not want to hide but Congress has hidden a lot.”, insinuating that Rahul Gandhi called Mahatma Gandhi a womanizer.

The same video was posted by Asianet news garnering 8,00,000 views. It was further popularized by Shiv Aroor, the Executive Editor of India Today.

Upon going through the YouTube channel of INC India, we found  Rahul Gandhi’s speech on the occasion of Mahila Congress Foundation Day. At 17:52 mark, Gandhi can be seen saying the statement mentioned above but the lines “Because his organisation (RSS) suppresses women, it crushes them. But our organisation gives a platform to female empowerment.” is left out of the video.

Since the video was deliberately clipped to present a false narrative, we can declare this claim misleading and was purposefully cut to create a negative image.