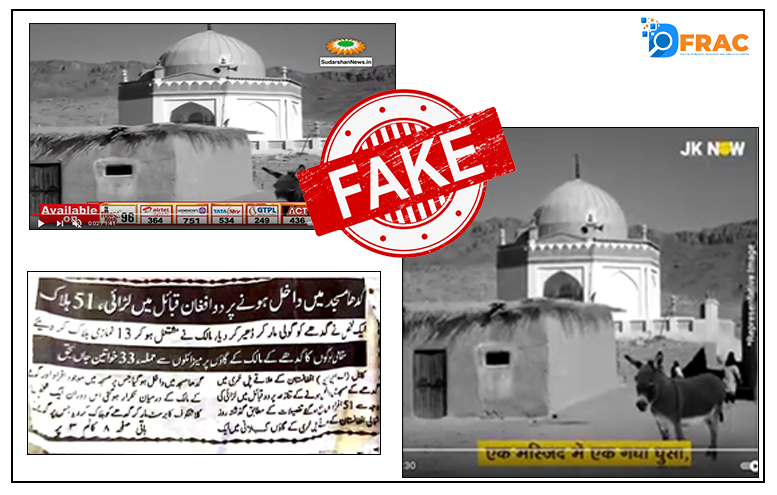 On September 8, 2021, Sudarshan News and Jammu Kashmir Now channels ran a television segment on an incident that took place in Pul-e-Khumri district, Afghanistan. The news anchor proclaimed that 51 people were killed in a dispute when a donkey entered a mosque and that as per her listed sources, the incident took place on September 1.

The fight took place between two communities which resulted in the donkey as well as 51 people being killed.

They cited two Pakistani news sources for the information namely, Daily Pakistan and Roze News Pakistan for this information.

Upon looking up the source of this news, we found Roze News’ report on the incident but it was reported back in 2020 and not 2021. According to the report, the incident took place on September 2,2020 and 51 people were killed.

The same was claimed by Daily News Pakistan as well but interestingly this news report was deleted from Daily Pakistan’s website but we archived the news report. This prompted us to dig into it further.

What was intriguing was that no news media outlets from Afghanistan have covered the news, granted that we searched the news in English. Additionally, upon further investigation into the articles written by Daily Pakistan and Roze News, both of them trace their source back to a newspaper clipping posted by a Facebook page called Balochistan Education.

However, we found discrepancies in this newspaper clipping and evidence of morphing is visible. Using InVid’s magnifying glass tool we found that the image is morphed.

Additionally, the comments on the Facebook post are overwhelmingly negative and have commented that the news is fake.

The evidence of this morphed image prompted us to perform a google reverse image search on the image used in the articles and found that the image is actually from a bombing that took place in 2019 in Afghanistan’s Jodari village.

Yet another unverified news segment run by Sudarshan News:

Sudarshan News has previously displayed a similar pattern of hate and misinformation that has been previously fact checked and called out by multiple sources. The taping of this news segment deliberately leaving out the date and not thoroughly verifying the source goes to show that J&K Now and particularly Sudarshan News had a hidden motive to spread hatred and misinform its viewers.

Therefore, since the article itself has not been written with verified sources and the fact that the two channels ran the story one year after the event took place renders this claim Fake.

We have previously published analysis reports on Sudarshan News. You can view them here & here.