HomeFakeFact-Check: Video of encroachment demolitions given a communal angle by Dr. Richa... 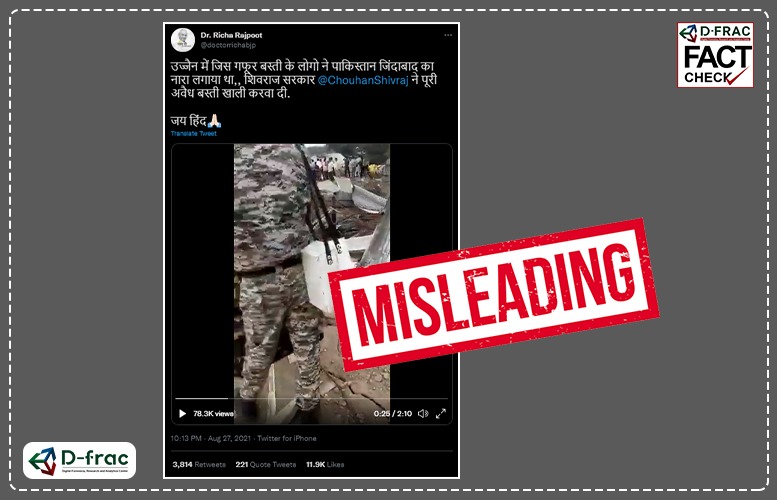 On August 27, 2021, a video of demolitions went viral on Facebook and Twitter. All the videos that were posted, were posted with the same caption. The users who posted this video claimed that Shivraj Chouhan’s government in Ujjain demolished a settlement named “Gafoor Basti” because the Muslims that lived there raised slogans such as “Pakistan zindabad”.

The video was posted multiple times over the course of the last two days with the maximum number of views received on the video posted by the Social Media Head of Bharatiya Janta Party’s Youth Wing (BJYM) Uttar Pradesh division, Dr. Richa Rajpoot.

The video posted by Rajpoot currently has 78,000 views and 11,000 likes. Rajpoot has also tagged Madhya Pradesh’s Chief Minister Shivraj Chouhan in the video as well.

The same video with similar captions have been posted over and over again by handles on both Facebook and Twitter.

Upon reverse searching the key frames of the video and trying to trace the news clippings of the event. We found that while the demolitions did take place in Ujjain, they did not take place at any place called Gafoor basti. We found local news reports that said that the demolitions took place because the area was encroached illegally. The encroachments from Harifatak Bridge to Wakankar Bridge were removed.

Another facebook post also talked about the true facts of the case. This claim is therefore false and misleading. What is baffling is that the social media head of the ruling party posted the claim tagging the chief minister of the state and yet no clarifications were issues on it. The claim was deliberately given a communal angle by Rajpoot and other users in order to create disharmony and hate in the society.