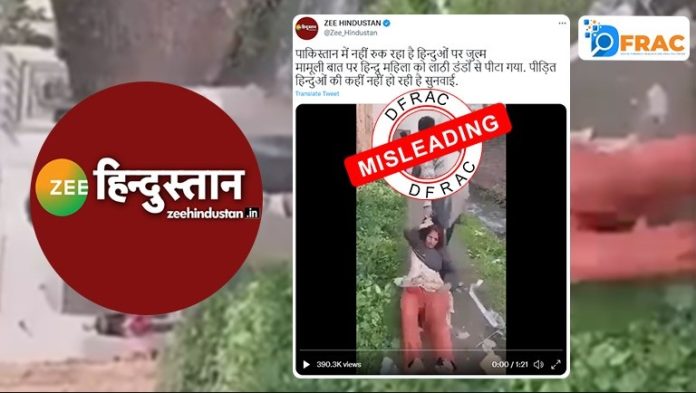 Zee Hindusthan, the news channel of the Essel Group, once again ran a piece of misleading news. In which claims of atrocities on Hindus in Pakistan were made.

The channel posted a video on its official Twitter account. Also wrote that the atrocities on Hindus are not stopping in Pakistan, a Hindu woman was beaten up with sticks on a minor issue. Victim Hindus are not being heard anywhere.

In the video, some men can be seen assaulting a woman.

To verify Zee Hindustan’s claim, the DFRAC team first converted the video into multiple keyframes with the help of InVID tool. Then did a reverse search image of each keyframe.

During this, the team received reports from Geo News and Dawn. In which screenshots of the video were used.

It was told in the report that this incident happened in January 2022. An elderly woman was allegedly tortured over a 13-year-old land dispute in Sialkot. After the video went viral, the Sialkot police took action by registering a case against 15 suspects and arrested nine, including four women.

Hence the viral video is misleading. Because the dispute was not communal but about land.