#Factcheck: Do the claim of AaJ Tak and ZeeNews on Bikram Singh Majitha is true? 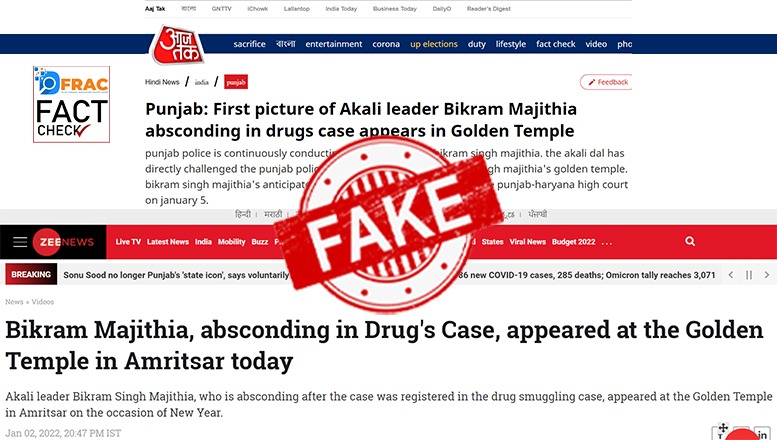 To a citizen of any country, media works as a bridge towards awareness of outer happenings around them but what if the media itself spread fake and misleading news? Whom shall be trusted in such a case?

Leader of Shiromani Akali Dal Bikram Singh Majitha, former cabinet minister of Punjab has been involved in many controversies and recently he is charged under section 29 (abetment and criminal conspiracy) of the Narcotic Drugs and Psychotropic Substances (NDPS) Act. According to the article in The Indian Express. As per the current scenario, Bikram Singh Majitha’s failed to get a stay order against the drug case until the next hearing on 10th January. Says the article in Hindustan Times.

The Akali Dal leader has been found visiting the Golden Temple in Amritsar on the occasion of New Year as per the Zee News and AajTak on the 2nd of January, 2022

The pictures are of Bikram Majitha which got published on Zee News and AajTak are of last year, 1st January 2021. Through the shreds of evidence, we have collected on the Facebook official page of Shiromani Akali Dal Majitha the same pictures was posted on 1st January 2021.

The Punjabi news Channel, PTC News has also covered his visit to Gurudwara and captured Mr. Bikram’s byte on his expectations towards 2021.