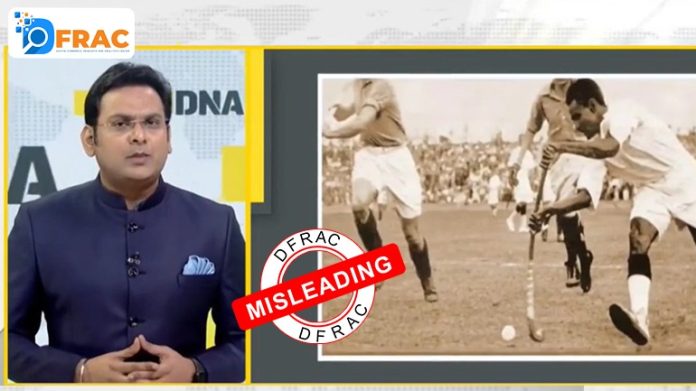 Anchor Rohit Ranjan on his show DNA said that when Major Dhyan Chanda retired in 1956, the Indian Government honored him with Padma Vibhusan.

Similarly, Vivek Bansal Official wrote, “Hundreds of salutes on the death anniversary of “Padma Vibhushan” hockey magician #मेजर_ध्यानचंद ji, who made an incomparable contribution in getting India three gold medals in the World Olympics.” {English Translation}

Further, many other users have shared the similar claim.

Padma awards which were instituted in 1954 are one of the highest civilian awards awarded by the Indian Government. The Awards are given in three categories: Padma Vibhushan (for exceptional and distinguished service), Padma Bhushan (distinguished service of higher order), and Padma Shri (distinguished service). The award seeks to recognize achievements in all fields of activities or disciplines where an element of public service is involved. The award is normally not conferred posthumously.

According to the official site of MHA 1956 Major Dhyan Chand was awarded Padma Bushan not Padma Vibushan.

This is not the first time ZEE news show DNA(Daily News and Analysis) has misquoted any fact. In our Exclusive report on DNA’s ex-anchor Sudhir Chaudhary, we have covered many other factually wrong information on the show DNA.