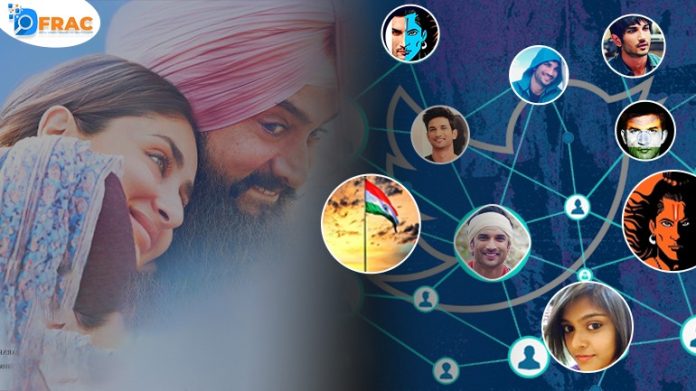 The film starring Aamir Khan and Kareena Kapoor Khan is getting flak on social media for comments that the actor made about India a few years ago and got occupied with the trend #BoycottLaalSinghChaddhaa.

This hashtag started on 9th July but it was initiated by @itsNikitaSingh who has more than 4.8k followers on Twitter.

‘Laal Singh Chaddha’ is a remake of the Hollywood classic ‘Forrest Gump’ played originally by Tom Hanks’ in a 1994 iconic film.

With #BoycottLaalSinghChaddha people are showing their aggression at certain comments and statements made by the lead actors of the movie Aamir Khan and Kareena Kapoor Khan. As both of them belong to a specific religion many social media users are also trying to give it a whole communal angle.

Not only this, but as soon as the trend started heating up on the internet many fake news too paved there path through it. In this DFRAC Exclusive, we are going to debunk some of the fake news.

For the promotion of the film Laal Singh Chaddha, a photo of actress Kareena Kapoor is going viral on social media, in which she is standing with a placard and it is written on it, ‘Don’t go to see our film nobody forces you to watch it.’ (English Translation)

News of DNA was found in the search result dated 15th April 2018. In this news, Kareena Kapoor is seen with a placard. Same dress and same look but the matter of placard have changed. On this card it is written –“I am Hindustan. I am ashamed. #Justiceforourchild. 8-year-old gang raped. Murdered in ‘DEVI’ sthaan. Temple. #Kathua.”

A user on Twitter posted a picture from Amir Khan’s movie, PK. Showcasing the scene in which Amir Khan is searching for the Hindu Gods while sticking posters on the walls.

But in the image shared by the social media user, there is a picture of a Muslim preacher instead of the hindu God.

Netizens are claiming that in his famous show “Satyamev Jayate” Aamir khan gave a statement that was against the Hindu sentiments. He said, “Don’t pour Rs. 20 milk on Shiva instead feed a poor.”

DFRAC desk searched for this statement of Aamir khan but found no such report based on this statement in any of the mainstream news which could have been a big buzz and talk of the town at that time.

Some posts claims that in 2015 Aamir Khan made a statement that goes like, “Poor children can satisfy their hunger with milk that is being wasted on idols.” Which too was from his movie PK but not in the real life.

DFRAC desk ran a keyword search with relevant terms such as ‘Aamir Khan and Shahid Afridi’ and found the article published by Sial X News.

The report states a Pakistani religious scholar Maulana Tariq Jameel met Aamir Khan on the occasion of Hajj in a Saudi Arabian hotel. And also the picture is a decade old i.e. from the year 2012.

Despite the lead actors of the film, Atul Kulkarni too is on the target of netizens calling him an anti-Hindu. “#AtulKulkarni is Hindu only when a movie is releasing.

A user on Twitter wrote, “#AtulKulkarni is not a Hindu but atheist, he himself said in previous tweets and opposed CAA. Bollywood is filled with many such liberandus who are just having Hindu names but serve agenda of Hindu haters in Bollywood. #BoycottLaalSinghChhadha.”

Atul Kulkarni is trending on Twitter after his old 2013 tweet, where he wrote “I am sure the religious groups must be against atheism. So what’s next?
A petition to criminalize atheists?! I’ll be in jail soon!!!”

Nearly 110 verified accounts on Twitter tweeted on the #BoycottLaalSinghChadha hashtag. News media houses like @aajtak, @htTweets @dna tweeted on the hashtag to cover the news and statement of Aamir khan on the trending hashtag. Apart from this, actor KRK (@kamaalrkhan) has criticized the movie and also very much supported the hashtag to boycott the movie. @ShefVaidya also tweeted on the hashtag, followed by @SherlynChopra. @Profdilipmandal and @tanuj_garg are among the people who showed disagreement with the trending hashtag.

To hype #BoycottLaalSinghChada the whole boycott army of SSR took on Twitter and amplify the trend.

More than 100 accounts of SSR supporters were found who all supported and tweeted with the hashtag of #BoycottLaalSinghChadha. Some of the accounts include, @MrPrajjvalTweet, @MadhumitaroyC, @Justice132465, @soniaRainaV, @Sharmis71586682, etc.

Below is the wordcloud that depicts the words used in the tweets containing the hashtags. Some of the words include, “Boycott”, “Bollywood”, “Please Support”, “Aamir”, etc.

In this report we have debunked many fake news which are giving this movie a communal angle and all the hatred which include the main cast of the Film Keerena Kapoor Khan and Aamir Khan who belongs to as particular religion and are subject to criticism for their statements and comments, and also the director of the film Amit Kulkarni for his Anti Hindu posts.

Error 403 The request cannot be completed because you have exceeded your quota. : quotaExceeded

A 23-second video of Rahul Gandhi is going viral on social media. Users who...
Load more

A 23-second video of Rahul Gandhi is going viral on social media. Users who...
Fact Check

A picture of Nationalist Congress Party (NCP) MP from Baramati Supriya Sule is getting...
Fact Check

Chitra Tripathi ran a misleading post about giving a speech in UK’s parliament.

A video is posted by Chitra Tripathi who is an anchor on AajTak. The...