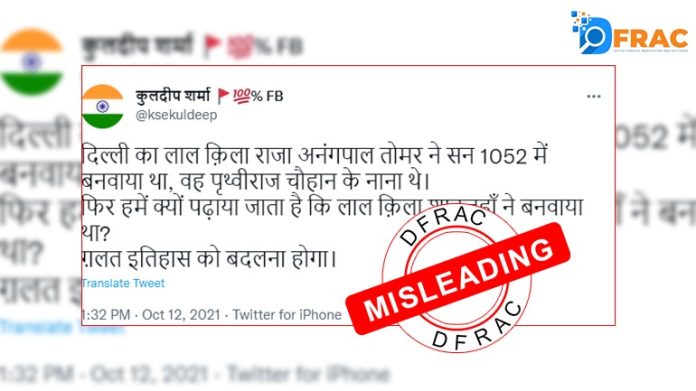 The discussion of Mughals is always there in Indian society. Users on social media sites are claiming that the Red fort in Delhi was built by Anangpal II.

Kuldeep Sharma (@ksekuldeep) named user tweeted, “The Red Fort of Delhi was built by Raja Anangpal Tomar in 1052, he was the maternal grandfather of Prithviraj Chauhan. Then why are we taught that the Red Fort was built by Shah Jahan? Wrong history has to change.”

Kshatriya Rajputana Pathakpur has posted the same article in camouflage.

On the other hand, after searching the sentence written in these tweets on Google, we found that the claim of making Red Fort by Anangpal has also been made in the articles published on many websites.

Website kreately.in  has made  the same claim by publishing an article in English.

hinduismsanatan.com has raised the question that in the zenith of Indraprastha, Dhillikapuri settled, flourished and continues till date as Delhi, how many people know this?

To investigate the claim being made about the Red Fort, we did a simple search on Google. During this time, we found that the website and text book of the National Council of Educational Research and Training (NCRT), established by the Government of India for the purpose of advising the Central Government and Provincial Governments on matters related to education, contains that Mughal Emperor Shah Jahan worked red fort in New Delhi, India, in 1648. That is, Shah Jahan built the Red Fort in Delhi in 1648.

It has also been told by NCRT that the Red Fort has been declared a World Heritage Site by UNESCO.

Shah Jahan, the fifth Mughal emperor, was the ruler of vast territories from Kashmir to the Deccan and from the North-West Frontier Province to Bengal. It decided to shift its capital from Agra to Delhi after being in power for 10 years in 1638.

Ustad Ahmed Lahori, the architect of the Taj Mahal, was tasked with designing royal buildings in Delhi. Ustad Hameed was his companion. These constructions were given a name, Qila-e-Mubarak, in the fort on the banks of river Yamuna.

At the same time, bbc Urdu report cited Inayat Khan’s book ‘Shahjahan Nama’ and said that the construction work of the fort started on Friday 9 Muharram (i.e. 13 May 1638). It took 9 years, 2 months and a few days to complete and cost Rs 60 lakh.

Nowhere in history is it found that on the basis of which it can be said that The Red Fort was built by Shah Jahan’s Anangpal II.

The signs of the fort that Anangpal II built are still there. According to the BBC report, “From a political point of view, Delhi got fame under the rule of a Tomar ruler, Anangpal. Anangpal established Lalkot in Delhi, the signs of which can still be seen in Mehrauli, which was later known as Qila Rai Pithora and became the first city of the Delhi Sultanate.”

The distance between Red Fort and Mehrauli in Old Delhi (Shahjahanabad) is about 22 km.

It is clear from this fact check of DFRAC that Shah Jahan built the Red Fort in 1648, so the claim being made by users that it was built by Anangpal II 300 years before Shah Jahan is fake and misleading, because Anangpal II built Lalkot (Fort Rai Pithora), not red fort.

Error 403 The request cannot be completed because you have exceeded your quota. : quotaExceeded

A 23-second video of Rahul Gandhi is going viral on social media. Users who...
Load more

A 23-second video of Rahul Gandhi is going viral on social media. Users who...
Fact Check

A picture of Nationalist Congress Party (NCP) MP from Baramati Supriya Sule is getting...
Fact Check

Chitra Tripathi ran a misleading post about giving a speech in UK’s parliament.

A video is posted by Chitra Tripathi who is an anchor on AajTak. The...