Fact check: The fake video under Russia’s attack over the building of the Ukrainian Defence ministry got viral 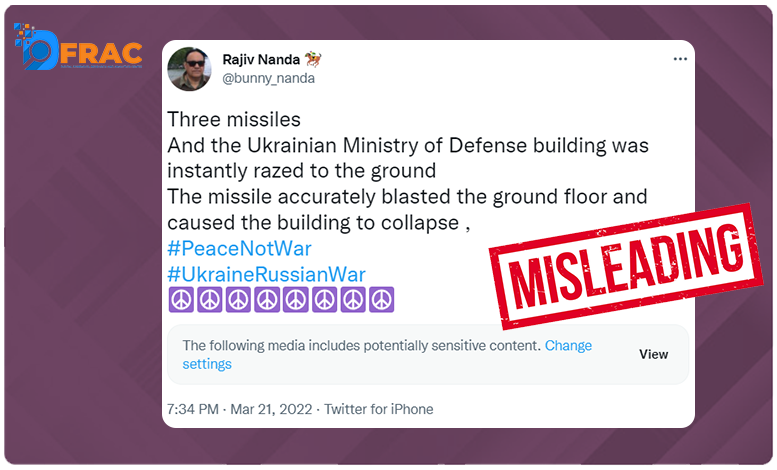 Ukraine-Russia, war has been continued for a month now another claim is getting viral on social media. As per the User, Russia has launched a missile to the defence ministry of Ukraine.

Rajiv Nanda shared a video of a reporter capturing a video of a building getting attacked by missiles. He mentioned that Russia launched 3 missiles and thrashed the building of the defence ministry in a second. The video was uploaded on March 21.

According to some users, the Russian army has informed the foreign reporters beforehand and evacuated the building. Further, some users also stated that no causality was found in the attack.

After examining the claim we researched for the attack that took place in the building of the Ukraine defence ministry. We found the original footage on the ANI which was uploaded on 24 February.

Through the news coverage of BBC, we found that the video was of an attack that took place in Gaza city after being hit by an Israeli airstrike. The video of uploaded in 2021 way before the conflict occurred.

Therefore, the viral video is not among Russia’s attacks on Ukraine.

Claim review: Fake video under Russia’s attack over the building of Ukrainian Defence ministry got viral