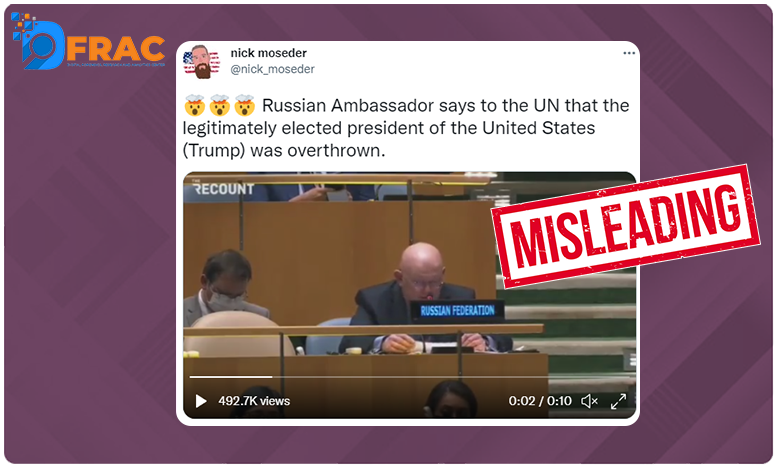 A video is going viral on social media, wherein users are claiming that Donald Trump was legitimately elected as the President of the US. Later he was thrown out.

Nick Moseder, shared a video of the Russian Ambassador’s dubbed speech in the United Nation. In the video, the female is stating how a legally and systematically elected President was thrown from his position in the US. The user pointed to former President Donald Trump in the reference.

Furthermore, many users were claiming the same after inserting the short video of Russian Ambassador on social media platforms.

Russian Ambassador says to the UN that the legitimately elected president of the United States (Trump) was overthrown… pic.twitter.com/tYyCZOzorh

EVERYONE knows in the world that no way 80 Million voted for jackass who promised to ruin the US. Russian Ambassador says to the UN that the legitimately elected president of the United States (Trump) was overthrown. pic.twitter.com/kYdXO2T7Qv

After researching, we got to know that he did mention how a US president was thrown out but he didn’t mention anything about Donald Trump. As per the users, Donald Trump was thrown out of the president’s post. His speech was driven towards the issue of the Ukraine-Russia conflict. United Nations posted the video on 3rd March 2022.