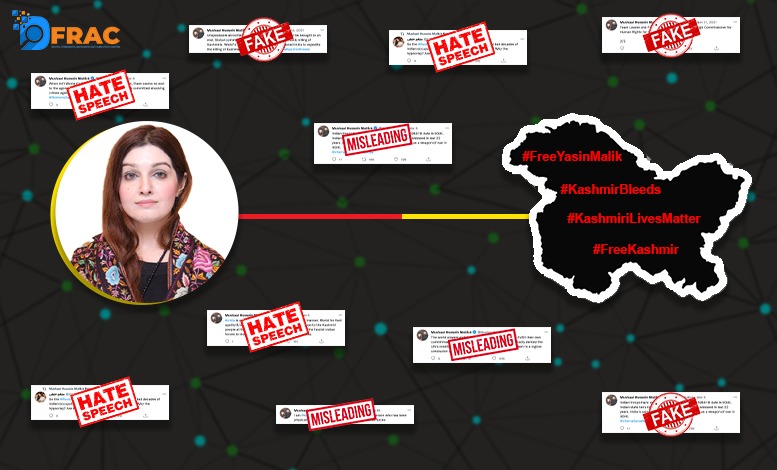 Jammu and Kashmir has always been a matter of debate between India and Pakistan, where India considers it as its integral part, while Pakistan calls it a disputed area. After failing at the international level on Kashmir, Pakistan has started a proxy war against India.

Various Pakistani accounts of famous personalities are running on the mechanism of defaming India. All these accounts talk about the atrocities that they think are faced by the Indian minorities (Muslims) in J&K trying to provoke the Muslim population of India as well as Pakistan.

Through our analysis today we will research one such personality is Mushaal Hussein Mullick, (@MushaalMullick) born in 1986, in Karachi Pakistan. She is as her Twitter bio says a Chairperson Peace & Culture Org, Artist, Freedom Fighter, Craft Revivalist, Peace Adv& Proud Wife of Kashmir’s Revolutionary Liberation Leader Yasin Malik, with more than 80 k followers.

Let’s now talk about her agenda: 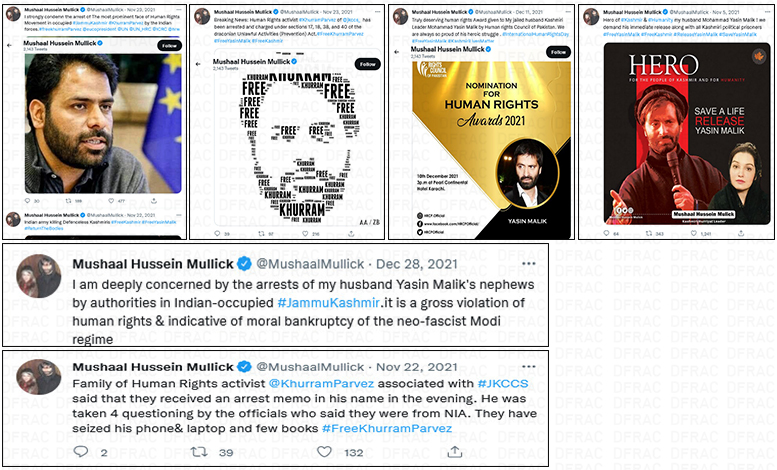 The graphical representation of her agendas is given below:

Accounts that were mentioned mostly in the tweets of Mushaal Hussein Mullick include, @UN with maximum number of mentions, followed by @UNHumanRights, @SRI_org, @appcsocialmedia, @Sabahnews786 and @ForeignOfficePk. 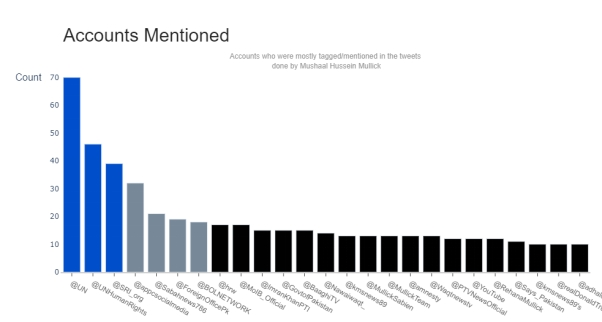 Below graph tells about the hashtags that were mostly used in the tweets. #Kashmir was used maximum number of times with over 360 counts followed by #FreeYasinMalik with 180 times followed by #KashmirBleeds with more than 130 times. Hashtags like #KashmiriLivesMatter, #FreeKashmir, #Kashmiris, #KashmirWantsFreedom, #Pakistan was also used many times. 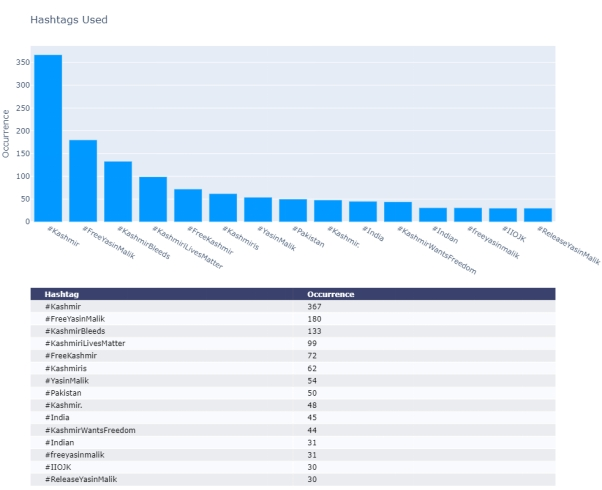 Similar Hashtags were used by famous pro muslim hate mongers like @aamiralkashmiri, @parvezsio, @YasirPost and @PeaceMoin we have covered these accounts on our report on Zakirnaik part 1 and part 2too. The collage of the tweets are given below: 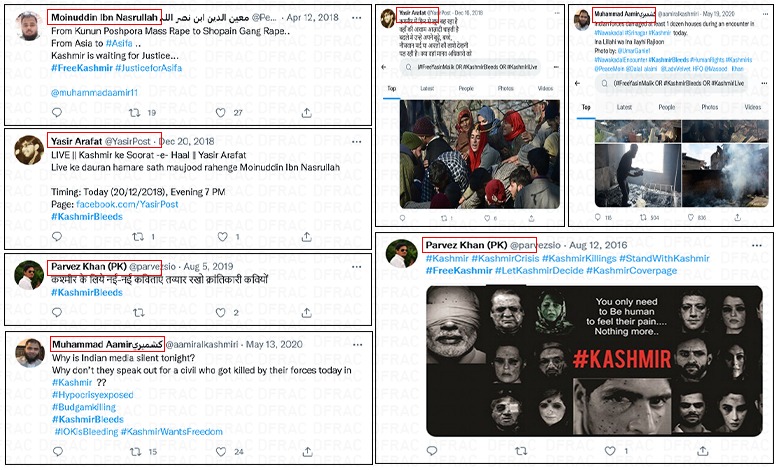 She has initiated several hashtags to free and release her husband Yasin Malik who is captured by Indian government for his attempts to separate and free Kashmir from India and was also charged for the murder of four Indian Air Force personnel. 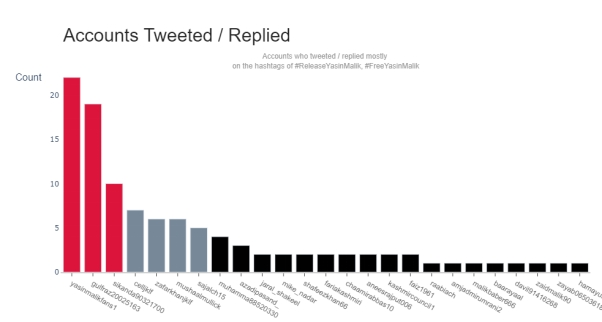 Mushaalis using saddening images of Kashmiri Women to show how depressed Kashmiris are from Indian Armed Forces. The images being used by the account are not related to the “torture of Indian Army on Women” as is specified in the tweets. Instead, these pictures are taken from different instances and collaborated in collage form to show the mayhem of the Indian Army on Kashmiris.

Claim: In the poster, it is claimed that “Thousands of married men martyred by Indian bullet and forcefully disappeared by Indian authorities” and some images of crying Kashmiri women are attached to it to prove the above point.

Reality: Those images which are attached to the poster are taken from different instances which do not relate to the instance mentioned in the tweet. 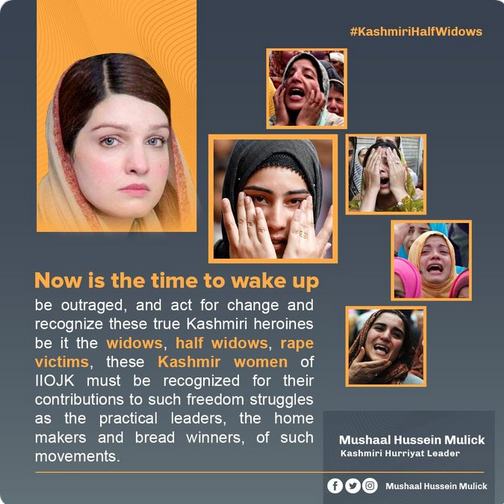 Look at the poster

What the poster was trying to depict through this Image?

The women in the image is the widow of a Kashmiri, who has been tortured by Indian Army Officers

Reality: This women in the image is the relative of Shabir Ahmad Malik, a Kashmiri Muslim Soldier of the Indian army, who got killed during the military operation. 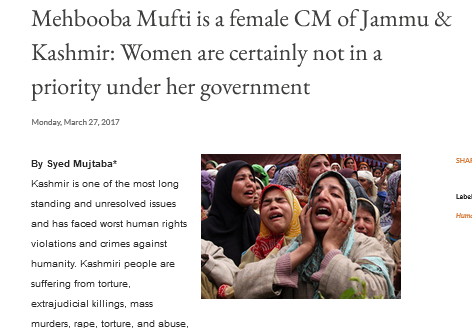 Conclusion: The same picture was used in the year 2017 and then again by Mashaal in the year 2021 hence,emotional pictures are being used (with wrong statements) to incite others.

What the poster was trying to describe through this Image:

The woman in the image is the widow of a Kashmiri, who has been tortured by Indian Army Officers

Reality:The woman in the image are crying because her whole family got hurt in Kashmir Earthquake, in 2005.

She accuses India of mere allegations to which she gave no solid proof on any of the allegations she has put on India as a country.

Reality: The Indian government has changed the names of the places, but not to Hindu names majorly but after the names of security personnel killed during counter-militancy and eminent personalities of the region.

Reality: no such news was found on the internet so only blabbering about the sensitive issues of the country security.

RSS-BJP combine is planning to install Hindu CM through manipulated polls. Modi and his cohorts are using Delimitation Commission to divide Muslim votes. The delimitation exercise is meant to give more seats to the Hindu-dominated Jammu region. #ModiPlottingPrePollRiggingInIIOJK pic.twitter.com/EgMoJVYszP

Reality: We searched the proof and find out that in a report of THE TIMES OF INDIA, the proposal states it will increase the total seats in the Jammu region from the existing 37 to 43, while in Kashmir the total seats will be 47 making it more even.

With #covid cases on rise, the Modi govt has shifted more than 250 ventilators to New Delhi. Are Kashmiris children of a lesser God? Do they not deserve to live? Do they not require basic health facilities?#COVID19India

Reality: through our research, we found that The Government of Jammu & Kashmir, through its National Health Mission, has done work by the successful implementation of many programs in the area of maternal and child health during the pandemic this can be wholly read under the article of IPE GLOBAL.

The post timeline shows that her activities on Twitter increased from 2018. Her engagement was on 11th Feb 2021 and her number of posts increased in the recent months. 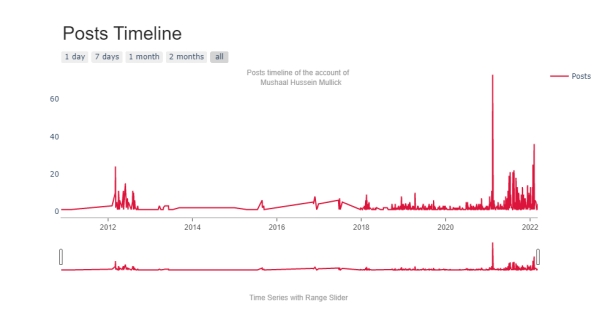 Below are some of the links of hate tweets done by her in which she is defaming the administration of India, while using major words like #modiclad #rss_bjp #kashmir #torture #savekashmirimuslimsetc. the collage of such pictures is also provided below. 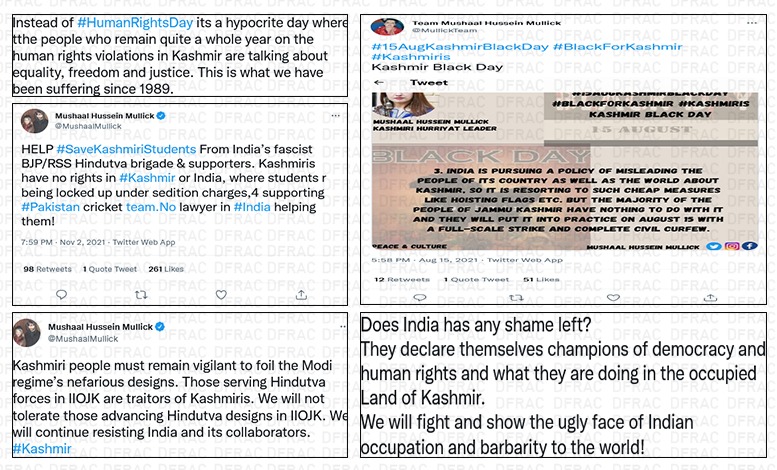 The WordCloud below tells us about the words that were used mostly in the tweets of Mushaal Hussein Mullick. Some of the words include, “Kashmir”, “Yasinmalik”, “IIOJK”, “Kashmiris”, “Freedom”, “Brutal”, etc. to attract the attention of global bodies towards all the biased tweets she does against India and to make sure that her husband gets free from the custody of Indian government. 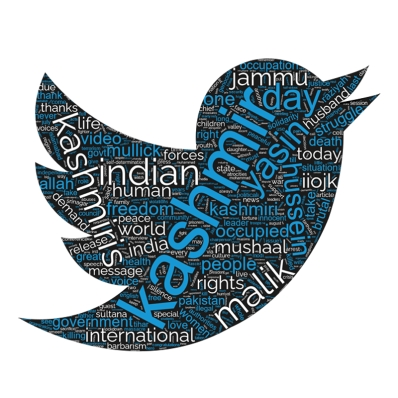