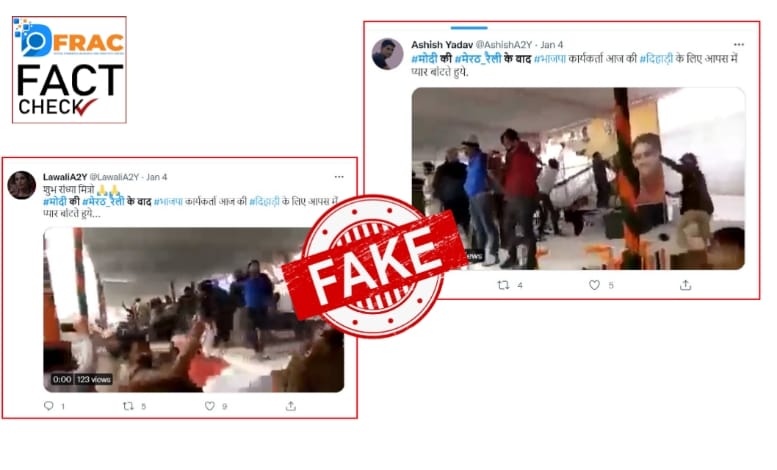 A video has got viral on almost every social media platform, accounts who have shared this video claims that in the Meerut rally of PM Narendra Modi, BJP members got into a fight on stage as in the video you can see the poster on the backdrop of the stage.

The video is getting viral on Facebook and Twitter; people on social are making fun of the video by sarcastically mentioning that BJP leaders have shared much love on the stage with each other and on the other hand people are also having sorrow towards the BJP members as they feel disappointed and sad about this act.

To know the truth behind the viral video we did some research and found a video on YouTube. The video was uploaded on 10th October 2021 having the same scene as you saw in the viral video. The video was uploaded by Aakib Abbas and he gave a caption, “हरियाणा में किसान भाइयों ने खट्टर का जन कार्यक्रम तोड़ फोड़ करके रद किया।। – YouTube “ which roughly translate in English that the riot was created in Haryana CM, Manohar Lal Khattar’s party convection.

After digging deep, we found much news on this riot which was published on 10th October 2021. The program was held to aware farmers of the benefits of 3 Farmer’s Law. Alas! The farmers arrived at the venue first and did the act of sabotage on stage.

Conclusion: The article proves that the video is of Haryana CM Manohar Lal Khattar’s party convection and not of PM’s Meerut rally, hence proving the viral video is fake and misleading.