Fact-Check: Culprits caught after morphing video to claim that Pro-Pak slogans were raised in Karnataka 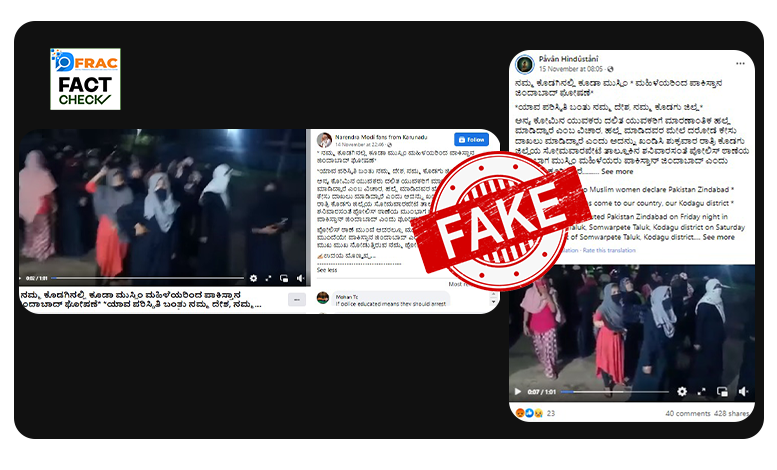 Three people from Karnataka’s Kodagu district have been booked for morphing and spreading a video with a fake claim that Muslim women were raising “Pakistan Zindabad” slogans in front of police officers.

The original video of the Muslim women raising ‘Ambedkar zindabad’ claims is said to be edited to make it seem like they were raising ‘Pakistan Zindabad’ slogans. The three arrested are Raghu, a member of the Gram Panchayat, Harish a journalist from the area and  Girisha who shared it on several social media platforms.

The three accused have been booked under 153 (provocation with intent to cause riot) and sections 34 (criminal acts done by several persons in furtherance of common intention) of the IPC.

The women were chanting ‘Ambedkar zindabad’ because a Dalit person was allegedly beaten up by people of other religions, the women sought to protest against this incident outside the police station.

The police have proclaimed that the video is fake but however, fake videos are still circulating online.

Various news reports have reported that Hindu organisations in the area have called for a bandh to arrest the people who raised pro-Pakistan slogans. Despite the police verifying the fact that this video has been morphed, the groups still went ahead with their protest.