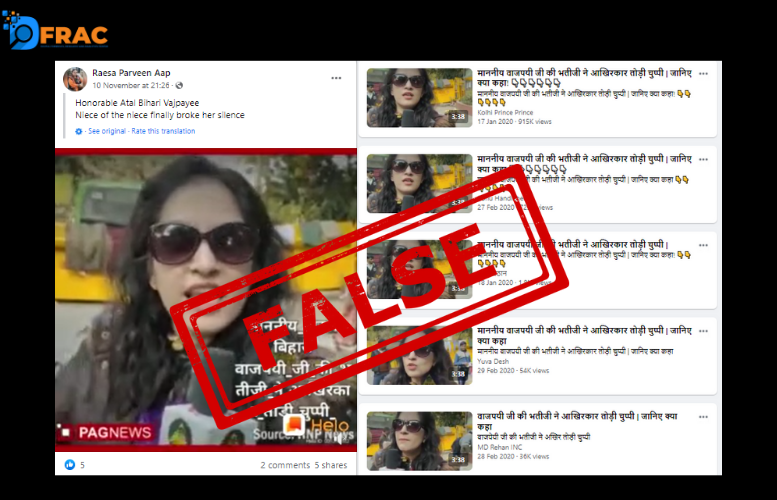 Recently a video of a woman speaking at a CAA NRC protest is going viral on social media. The video is said to be of Atal Bihari Vajpayee’s niece who can be heard criticising PM Modi’s government.

The woman can be heard saying in Hindi, “They (Britishers) did a lot of bad but at least they were outsiders. First of all, they were not ours, they were not from this land. They came from afar and came here to do this. But still, the difference between them (Indian government and Britishers) was that they (Britishers) were educated. They were not this illiterate. At least they didn’t do this with Britishers that the government is doing with its own people. Why can’t they understand they are Indian? They should talk about India. They tell Congress, they tell others, they tell us – why are you silent about Pakistan? Are we crazy that we should talk about Pakistan? Are you not enough to talk about Pakistan? You are obsessed with Pakistan. You can’t think of anything else besides Pakistan. Whenever you speak you always speak about Pakistan. Who will talk about India? Pakistanis did not elect you, we elected you. And we regret electing you.”

However, upon reverse searching the key frames of this video we found that the woman is actually named Atiya Alvi, a fact that was confirmed by her sister Naziya Alvi Rahman.

Additionally, we found that Atal Bihari Vajpayee’s niece is named Karuna Shukla, who is a Congress politician frequently critical of the BJP.