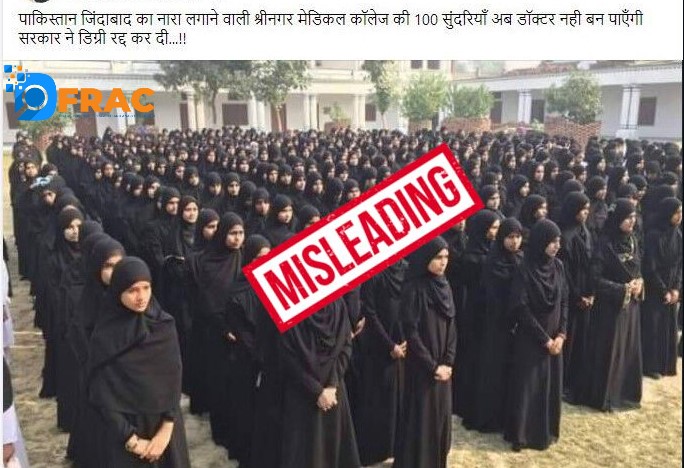 The match was played between India and Pakistan in the World Cup T20 on 24 October. In this match, Pakistan defeated India by 10 wickets. This was the first time in the history of the World Cup that Pakistan defeated India. At the same time, many controversies also came to the fore after this match. Indian player Mohammed Shami was targeted by the hate mongers on the social media.

After this, Indian captain Virat Kohli and Opener Rohit Sharma were also criticized a lot by these hate mongers. Amidst these controversies, it is becoming a picture viral on social media. It is being claimed about this picture that it is of medical girl students in Srinagar Medical College. Government cancelled 100 degrees of girls students because they raised the slogan of Pakistan Zindabad after Pakistan win in the world cup.

Sharing this picture, Facebook user ‘Bajrang Gaur’ wrote – “100 beauties of Srinagar Medical College who raised the slogan of Pakistan Zindabad will no longer be able to become doctors, the government canceled the degree…!!” At the same time, many other users have also shared this picture on social media, whose caption has been written almost like the same.

Our team investigated the picture going viral on social media. In Google reverse image search, we found this picture first published on the website of New England News, which was put in an article published on 12 November 2017. According to the information given in this report written by Abu Zafar, this picture is of Fatima Girls Inter College located in Dawoodpur village of Azamgarh, Uttar Pradesh, where these girls are praying in the morning.

On many other websites also we found this report with the same picture, Which confirms this picture to be of Fatima Girls Inter College located in Azamgarh.

The fact check of this picture proves that the picture going viral is not of any medical college of Kashmir, but of Fatima Girls Inter College located in Dawoodpur village of Azamgarh, Uttar Pradesh. Hence the claim made on social media is fake, misleading and fabricated.