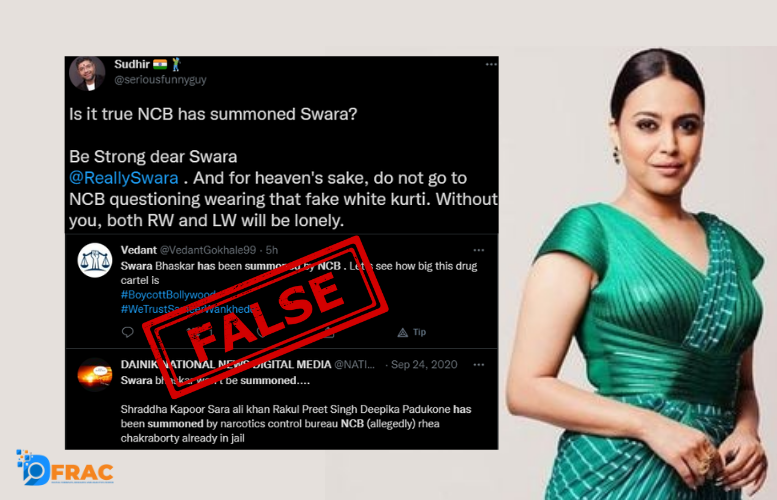 Amidst the ongoing Cordelia drug case which has implicated children of Bollywood actors including Aryan Khan whose arrest has been much publicised in the media, many fake claims and misleading facts are flying around on social media.

Actress Swara Bhaskar remains a contentious figure on Indian twitter known for being outspoken against the central government. It comes as no surprise that she too is now being linked to the same case.

On October 22,2021, claims about Swara Bhaskar being summoned by the Narcotics Control Bureau began to circulate online.

Many posted the claim without any verification by the news media and took this opportunity to take digs at her.

The claim was posted by @seriousfunnyguy who is followed by Union Minister Smriti Irani, Editor of Network 18, Aman Chopra, news anchor Sumit Awasthi amongst others. He also has over 1,00,000 followers on Twitter.

We checked through NCB’s website on any updates on the matter but could not find anything. Additionally, ANI news has a separate section for all NCB related summons but it does not reflect anything on Swara Bhaskar.

We also performed key word searches to see if any news outlet had picked this news up but could not find anything. Since there is no credible source on Swara Bhaskar being summed by the NCB yet, this claim is fake.