Fact-Check: After the abrogation of Article 370 and 35A, a Kashmiri Pandit stopped cow slaughter in Kashmir? 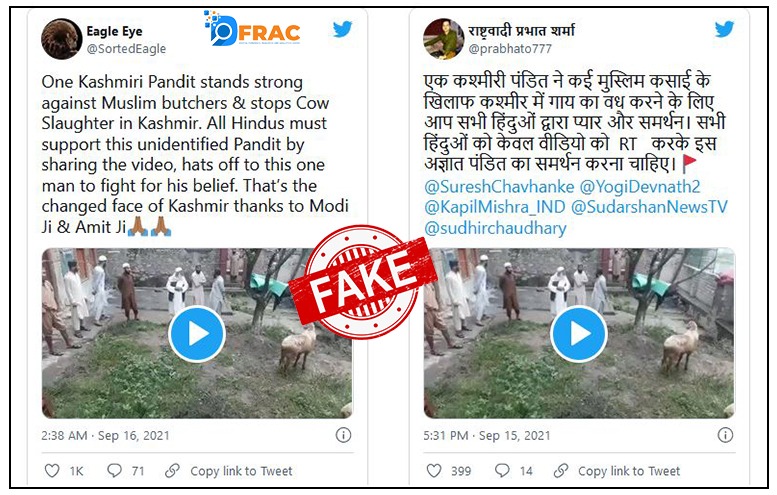 In the last 2 days, a video from Kashmir is going viral on all social media platforms. In this video a man can be heard stopping the slaughter of cows in Kashmir. The man can be heard saying,”I will see how you will slaughter 20-22 cows, Molvi Sahab is this a slaughterhouse? I am harmed by this. You will slaughter so many cows, what am I supposed to do with the stinky smell and the blood? This time I will see how you will do it, don’t dig any holes here, I am telling you.”

The video has been re-uploaded and shared hundreds of times with people claiming that the man in the video is a Kashmiri Pandit, who after the abrogation of article 370 and 35A was able to stop cow slaughter from happening.

Upon reverse searching the key frames of this video, we found that the earliest instance of when this image was posted was in August when a Facebook page called Jammu Samvad posted the video on August 6,2021.

Upon some further research we found that the media website The Kashmir Walla reached out to the man in the video and it turns out that the man is a Kashmiri muslim named Arif Jan.

He also states that the issue was solved on the same day itself by the mosque community and was alarmed by the use of this video for propaganda.

Since the man in the video himself came forward and clarified the matter, this claim is misleading and was only spread for propaganda purposes.