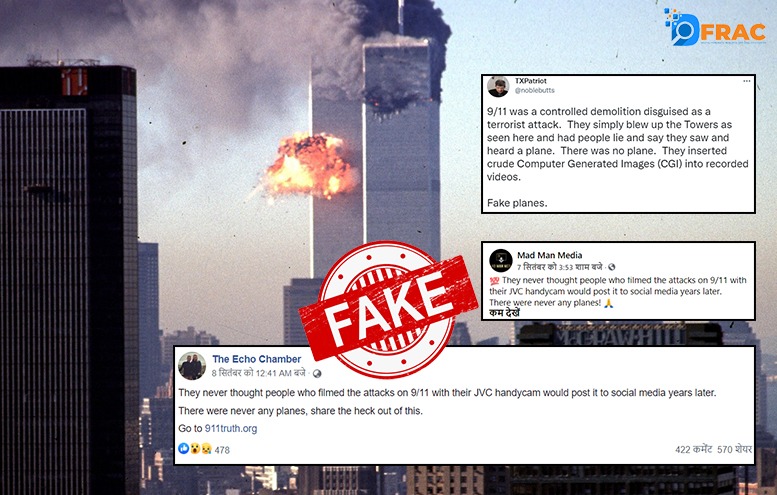 A video has been shared on social media platforms like Facebook and Twitter on terrorist attack of 9/11 happened at the World Trade Center in New York. This video purportedly showing ‘no planes’ in the 9/11 attack is a hoax.

“9/11 was a controlled demolition disguised as a terrorist attack. They simply blew up the Towers as seen here and had people lie and say they saw and heard a plane. There was no plane. They inserted crude Computer Generated Images (CGI) into recorded videos.” Said by a twitter user.

“They never thought people who filmed the attacks on 9/11 with their JVC handycam would post it to social media years later. There were never any planes, share the heck out of this,” read a post on Facebook .

This post on twitter has more than 26k views on the video while the other video on Facebook has got more than 12k views. The videos were shared few days before the 20th anniversary of 9/11 attacks.

Fact-Check: Although, the video has been doctored to remove a plane seen in the original footage. After doing some analysis and reverse image searches the actual video was found to be posted on YouTube. The footage is credited to photojournalist Keith Lopez .

Also the footage from other news channels also shows the moment Flight 175 hit the South Tower, including the CNN live broadcast.

Hence it clearly states that the original footage has been misused and altered to spread fake news in the society.