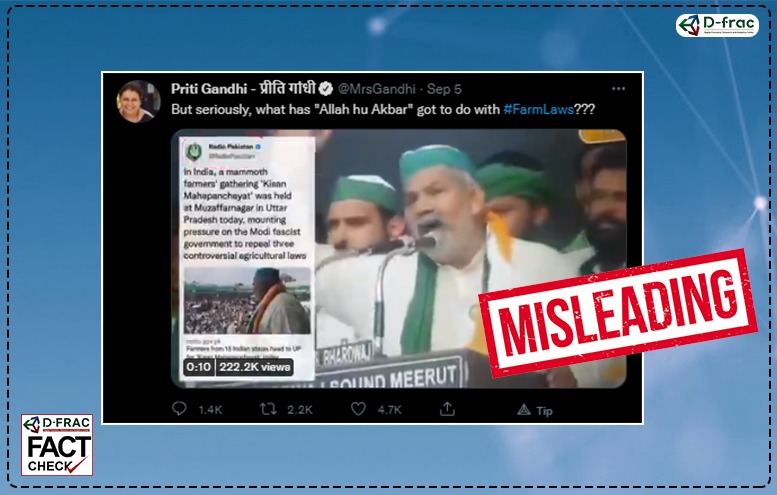 On September 5, 2021, Priti Gandhi, a popular figure on twitter posted a video of Rakesh Tikait, the leader of Bharatiya Kisaan Union giving a speech at the kisan Mahapanchayat that is currently taking place in Uttar Pradesh.

In the video, which is less than 20 seconds long, Tikait can be heard saying: “If such a government comes into power, they will work to cause riots. Earlier when Tikait sahib (his father Mahendra Tikait) was there, we used to chant slogans…Allahu Akbar, Allahu Akbar.” The crowd can be heard saying it back to him.

Many apart from Priti Gandhi posted the same video criticising Tikait for this move.

Upon reverse searching the key frames of the video, we found a 15 minute clip of the speech posted on Punjab Tak. The clip is significantly longer than the 20 second clip going around on social media.

In his speech, Tikait said: “The slogans of Allah Hu Akbar and Har Har Mahadev have always been raised and will continue to be raised. We will not allow riots to happen here.”

Therefore this claim made by BJP leaders in false and misleading.