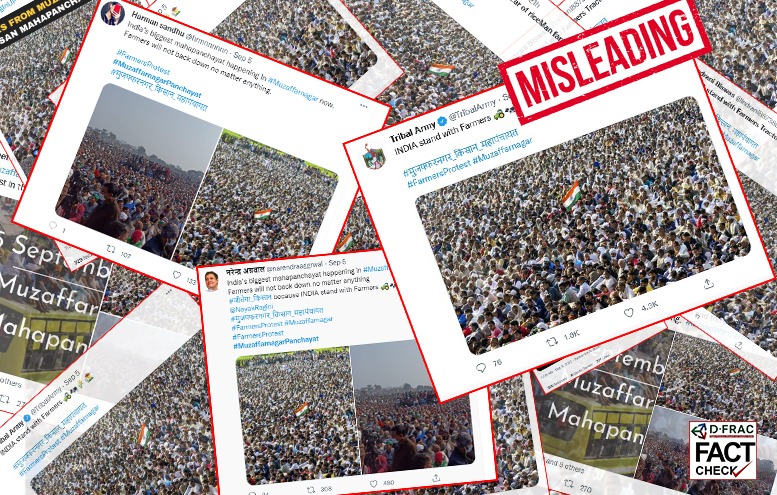 Lakhs of farmers gushed out into Muzaffarnagar on Sunday for the Samyukt Kisan Morcha’s largest mahapanchayat so far to hear Bharatiya Kisan Union (BKU) leader Rakesh Tikait declare his resolution to expel the BJP government in Uttar Pradesh next year by tapping into rural anger and uniting farmers and workers across caste and religion.

Thousands of people have also shown interests via social media platforms like twitter, supporting the movement and tweeting about the same.

In the midst of this, a picture has been spread out by a verified account on twitter known as Tribal Army, showing crowd supporting a movement with Indian flag. The account handler also wrote “India stand with Farmers” along with some viral hashtags on Muzaffarnagar protest.

This post of Tribal Army got 1.8k Retweets and 4.3k Likes. Later, this picture has been shared by many twitter users referring this picture to be of protest in Muzaffarnagar. 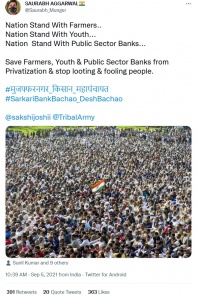 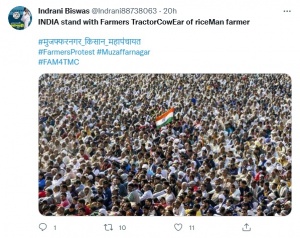 Even a MP of Birmingham Edgbaston and Shadow International Development, Preet Kaur Gill posted this picture along with some other pictures on the Muzaffarnagar protest.

#MuzaffarnagarPanchayat – 9 months on and the #FarmersProtest the largest in the world is still going strong. #IStandWithFarmers pic.twitter.com/AN5JLD6v1M

After some pictures got viral, we did some reverse image searches to check out whether these images are legit or not, which are being shared across social media platform. With our results, we found out that these pictures are of kisan panchayat at Shamli, Uttar Pradesh dated on Feb 5, 2021 and of Jind district in Haryana.

These pictures have been shared by HW News, Tribune and also by The New Indian Express on 3rd, 6th and 24th Feb respectively.

This clearly depicts that the pictures used in the post are misleading and are not from the current Muzaffarnagar protest but from Shamli, Uttar Pradesh and Jind, Haryana. Users are spreading these images to show the intensity of the protest and to amplify its influence on the government and people.