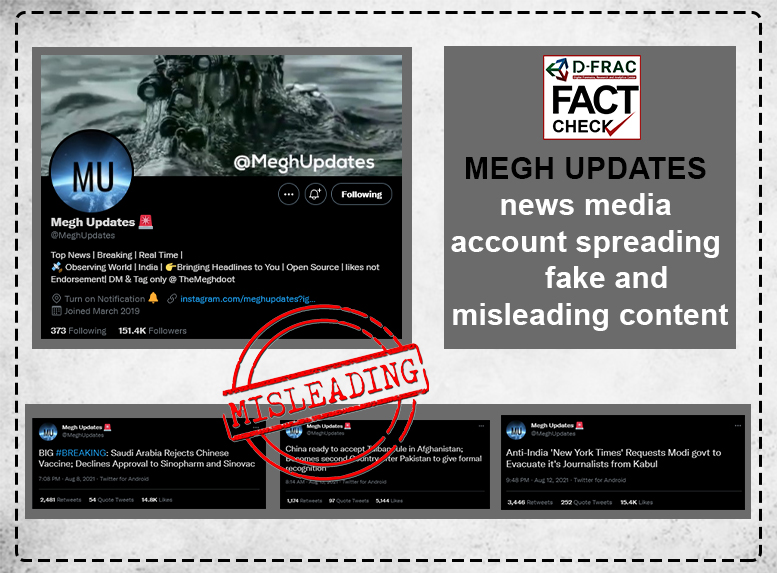 Megh Updates is a twitter news dispensation account run by another twitter user who goes by @TheMeghdoot. Megh Update posts real time ‘headlines’ on the page for the purpose of giving bite-sized news updates to its followers.

Megh Updates has over 1.5 Lakh followers on twitter having only joined in March 2019. The account is followed by many verified handles such as Swati Goel Sharma of Swarajya Mag, and Vijay Patel.

Megh Updates usually posts news about the opposition and members of the minority community. But we have found many discrepancies in the news headlines posted by the account.

China and the Taliban Rule:

On August 13, 2021, the account posted the headline mentioned below. According to this headline China is ready to accept Taliban’s rule in Afghanistan and it is the second country to do so after Pakistan.

Upon searching about this claim we found that there have been no official statements made by the Chinese government in this regard. A news organization called US News reports that according to its sources, China may recognize the Taliban government if Kabul falls but none of these claims have been supported by actual evidence.

Additionally, there are no official or unofficial statements made by the government of Pakistan on the current occupation of Afghanistan’s territories by Taliban forces. There this headline is false.

On August 12, 2021, Megh Updates claimed that the ‘Anti-India’ news conglomerate New York Times requested India’s central government’s assistance in evacuating its journalists from Kabul. The tweet has over 15,000 likes and has been retweeted by verified accounts.

We investigated this claim and found that there has been no official correspondence between the central government and the New York Times in the last week. There is also no mention of this arrangement anywhere on  any news media websites except Swarajya Mag.

This claim seems to have come from a tweet posted by CNN News18’s contributing editor Aditya Raj Kaul.

We tried to get in touch with Mr. Kaul but did not receive a response as to where this claim is from. Since there is no official correspondence between the two, we can safely say that this claim too, is false.

In order to debunk this claim we looked up whether Saudi Arabia had indeed declined the approval for the vaccines. Saudi Arabia has currently approved three vaccines to be administered to its citizens namely, AstraZeneca, Pfizer and Moderna.

While Saudi Arabia’s government did express concern for the vaccine’s efficacy it has certainly not rejected the approval for the vaccines. Infact, on August 4, Saudi Arabia approved the entry of people vaccinated with Sinovac along with a booster shot of one of the three vaccines.

Therefore, this claim made by Megh Updates is misleading.