OLX scammers wreaking havoc on both buyers and sellers 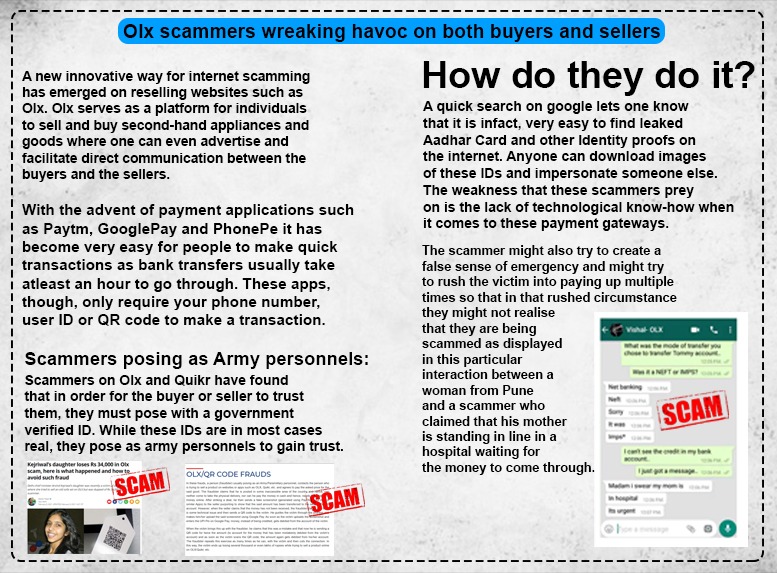 A new innovative way for internet scamming has emerged on reselling websites such as Olx. Olx serves as a platform for individuals to sell and buy second-hand appliances and goods where one can even advertise and facilitate direct communication between the buyers and the sellers.

With the advent of payment applications such as Paytm, GooglePay and PhonePe it has become very easy for people to make quick transactions as bank transfers usually take atleast an hour to go through. These apps, though, only require your phone number, user ID or QR code to make a transaction.

One major loophole here is that, because this technology is fairly recent, many do not have the technical know-how of applications. This is the point of weakness that is exploited by these scammers.

Scammers on Olx and Quikr have found that in order for the buyer or seller to trust them, they must pose with a government verified ID. While these IDs are in most cases real, they pose as army personnels to gain trust.

Once the scammer has gained the trust of the victim, he asks the victim whether he can pay for the product using one of the above mentioned apps. The scammer then  sends a fake screenshot of a payment receipt to the victim. If the victim then catches on and says that they haven’t received any money. The scammer proceeds to send a QR Code to the victim where instead of receiving the amount, the amount gets deducted from victim’s account. This step is repeated as many times as possible till the victim does not realise that something is wrong.

Victims can lose upto lakhs of rupees like this. The scammer eventually stops picking up the phone or replying to messages.Countless individuals have fallen for this scam including the likes of Arvind Kejriwal’s daughter, who lost Rs. 34,000 while trying to sell an old sofa set on Olx.

A quick search on google lets one know that it is infact, very easy to find leaked Aadhar Card and other Identity proofs on the internet. Anyone can download images of these IDs and impersonate someone else. The weakness that these scammers prey on is the lack of technological know-how when it comes to these payment gateways.

The scammer might also try to create a false sense of emergency and might try to rush the victim into paying up multiple times so that in that rushed circumstance they might not realise that they are being scammed as displayed in this particular interaction between a woman from Pune and a scammer who claimed that his mother is standing in line in a hospital waiting for the money to come through.

How to avoid getting scammed?

Due to the sheer volume of these scams, Olx had to issue a statement regarding them urging people to be more vigilant. The cyber cell of New Delhi advises people to do the following:

1. Verify credentials of buyer/seller before making or receiving payment.

2. Buyer/seller showing unreasonable hurry or urgency is a likely fraudster.

3. Don’t click on any link or scan a QR Code. You may lose money.

4. Avoid accepting or making advance payment. It may be a trap to defraud you.

5. Fraudsters use fake identity proof of national institutions to gain confidence and faith. Beware of any such attempt.