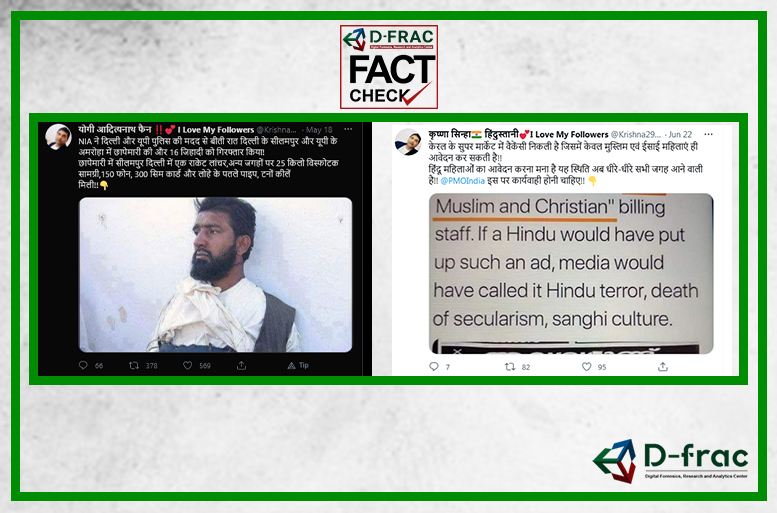 Creating divisiveness through fake news and misinformation has become the norm amongst popular right wing twitter accounts. These accounts primarily target minorities by twisting the information as well as simply creating conflicts out of thin air . On June 22, 2021, twitter user @Krishna29892392 posted a screenshot of a newspaper advertisement that expressed a supermarket’s need for a billing staff  who is “Muslim or Christian” only. It must be noted that this account is followed by influential handles like @KapilMishra , IND re, @rohit_chahal.

Fact check – Upon searching online for this claim, we discovered that not only is this advertisement seven years old

The decision to recruit Christian and Muslim employees in the billing section was taken because it becomes difficult for us to reorganize the work during festival time”.

Therefore, this claim is also false and misleading and has only been made to communalise the news.

In another post on May 18, 2021, the user claimed that a terrorist group of 14 were being arrested from Seelampur, Delhi accusing them of planning a terror attack. The user also posted a picture of a man along with this post.

Fact-Check : We reverse searched the image and found that the man wearing the suicide vest is at least 8 years old and is from Afghanistan.

The news therefore is false. The picture has previously been fact checked by India Today but is still making rounds on social media. This account seems to have a pattern of hate towards minorities and regularly posts fake and misleading information.