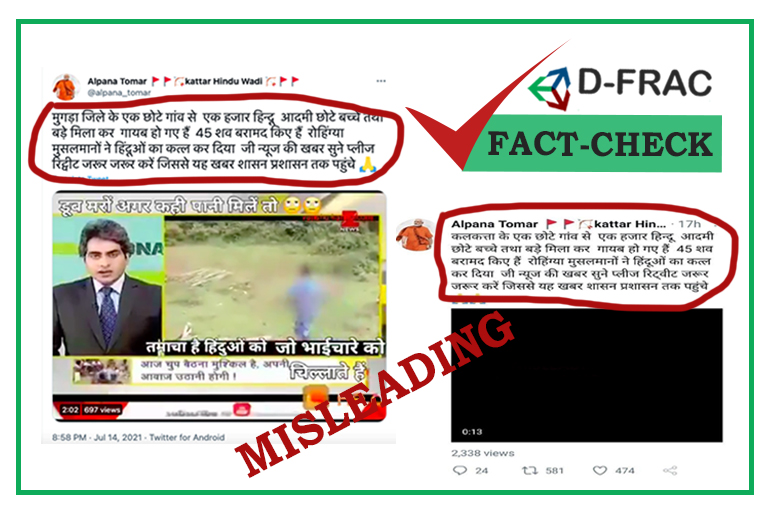 While Twitter is increasingly becoming a polarized space, reflective of the current political landscape of India. There are a growing number of accounts that are emerging with a right wing narrative and a particular fondness for hate speech against minorities. The growing number of accounts has led to the creation of hate through fake news and misinformation against various minority groups in India. One such twitter handle is @alpana_tomar .This user is followed by various verified accounts such as B.P Saroj (MP, BJP) and currently boasts over 8,500 followers.

In a recent claim made by her, she alleged that 1000 Hindus including children went missing in Kolkata and out of which 45 bodies have been discovered. Her claim was that these Hindus were killed by Rohingya Muslim refugees but later, deleted the post.

Interestingly, she posted the same video again on July 14 with the exact same content only changing the location from Kolkata to Mugda district (Bangladesh).

As is the case with most viral posts against minorities, this particular text and video was mass circulated by other accounts.

The clip circulated by the likes of Alpana Tomar and others is a news segment from 2017 covering the mass murders of Hindus in Rakhine State, Myanmar.  Therefore, the claim that 1000 hindus were killed by Rohingya Muslims in Kolkata is fake.

On May 28, 2021,Alpana Tomar posted a video of a mob beating and dragging a man in West Bengal. She linked the video to the post-poll violence in West Bengal.

Fact-Check – This incident is from May 5, 2021 in Uttar Pradesh where locals beat up a UP state Government electricity board employer over the issue of non-availability of electricity. Newspapers such as Hindustan Times and Amarujala have reported on the incident.

Handles such as Alpana Tomar’s and numerous others have resorted to using doctored videos and images to spread false information. This makes their agenda extremely clear, which is indeed to spread hate against minorities.