HomeHateDFRAC Exclusive: The hiked streak of misinformation and hate against Rohingya

DFRAC Exclusive: The hiked streak of misinformation and hate against Rohingya 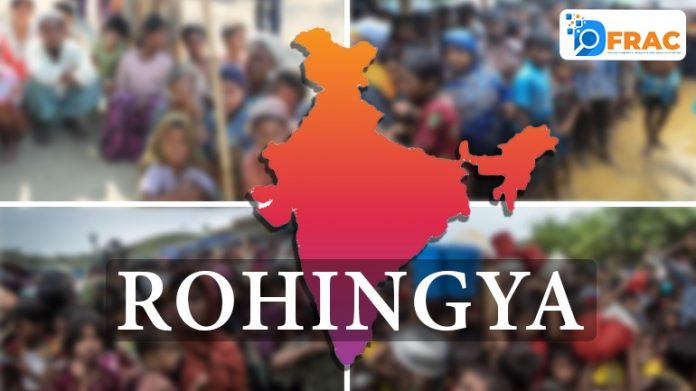 In August 2017, lakhs of Rohingyas were forced out of their homes in Rakhine, Myanmar. UNHRC says they are victims of armed attacks, massive scale violence, and serious human rights violations. More than 7 Lakhs of them had to flee to other countries to seek shelter. In India, the government estimate puts the figure of Rohingya refugees living in India beyond 40,000 with maximum concentration in and around Jammu. From time to time, they have been the victim of hate and atrocities all over the World.

This time after a viral claim that Rohingyas will get EWS Flats in Delhi, there is a spike in Fake and hateful misinformation about the Rohingyas. In this, DFRAC exclusive contains misinformation and

the nature of hate against them. The type of Hashtags used against Rohingyas are #रोहिंग्या_स्वीकार_नही #रोहिंग्या_को_बाहर_करो #रोहिंग्या_भगाओं_देश_बचाओं

Rohingya’s are being shifted in EWS Flats

There is a viral claim going on that Rohingyas will get EWS flats in the Bakkarwala area of Delhi. The controversy begins after a tweet from Union minister Hardeep Puri. Sharing the same tweet, New24 Wrote, “Delhi: 1100 Rohingya families to be shifted to flats built for the poor.Modi government will make all arrangements from food and drink to TV-phone, Delhi Police will provide security: Union Minister Hardeep Puri.” {English Translation}

Reality: Union Ministry have clarified that there is no such plan yet. In a tweet form the verified handle of HMO, it was mentioned that, “With respect to news reports in certain sections of media regarding Rohingya illegal foreigners, it is clarified that Ministry of Home Affairs (MHA) has not given any directions to provide EWS flats to Rohingya illegal migrants at Bakkarwala in New Delhi.”

60,000 Children born in Rohingya camp in one year.

Social media users are sharing a screenshot in which it is written that “60,000 children are born in Rohingya camps in a single year! Now tell me…Did they come for the shelter…Or for a honeymoon…? All this is a big conspiracy to destroy the country.”

Sharing the screenshot a user @sagrolikarBJP wrote the caption, “Even animals and pigs have some manners” along with the hashtags #rohingyarefugees #rohingyagoback.

Reality: On keyword search DFRAC team found an article on a Bangladeshi website, Daily Bangladesh which was published on 02 September 2022. The title of the article was 60,000 Rohingya babies born in a year.

Hence, the claim of social media users is misleading as this news is 4-year-old. Moreover, it’s not from India but from Cox’s Bazar, Bangladesh which reportedly is the world’s largest refugee settlement.

Social media users are claiming that more than 5 lacs Rohingyas are living in Hyderabad and are majorly involved in felonies.

Reality: The total Rohingya population in India is around 40,000 therefore it is impossible that there will be 5 lac Rohingya in Hyderabad. Further, according to a report by the Organizer, out of 6000 Rohingya people in Hyderabad-Telangana in refugee camps in the city’s Balapur area, 4,000 of them have found a home in Hyderabad.”

Hence, the claim that there are more than 5 lac Rohingya in Hyderabad is false,

An old video got viral with the claim that Rohingya refugees are crossing Indian border illegally.

Reality: On keyframe analysis DFRAC team found the same video on the Youtube uploaded by Biswajit Sarkar on May 21, 2015. Moreover, the title of the video was “Illegal entry from bangladesh to india at Milan mela in West Bengal Uttar Dinajpur.” Therefore, the video is old and the context in which it is being shared is also flawed.

Another noteworthy point is that the mass exodus of Rohigyas from Myanmar only took place around September 2017, but the video is of 2015.

An infographic having misleading number of Rohingya refugees went viral

Sharing a screenshot social media user @katterhindu0001 wrote, “Rohingya Go Back will be big hurdle in nation building and and will be injustice for deserving indians. Rohingya Go Back D.m10.”

Reality:The government estimate puts the figure of Rohingya refugees living in India beyond 40,000 with maximum concentration in and around Jammu. DFRAC have already did a detailed analysis on the number of Rohingyas in different countries. The link is being provided here.

Rohingyas in Assam have grab 73% of the Hindu Property

An image is getting viral on social media sites in which it is written, “In the Hindu dominated state of Assam, lakhs of invading Bangladeshi Muslims, infiltrators, have grabbed 73% of the property of Hindus by colluding with local Muslims, Hindus now have to live in refugee camps. {English Translation}

Reality:  There is no such incident occurred in which Rohigyas have grabbed 73% of the Hindu property. Further, the claim 40 lakh Rohingya are living in India is also wrong. The total count of Rohingyas in India is 40,000. The link of the detailed factcheck is provided here.

Video of a train full of Rohingya.

A video of train with lot of people sitting over it went viral on the social media with the claim that the train is full of Bangladeshis and Rohingyas. Along with the video, a user wrote -“#BiharPoliticalcrisis after Lalu Prasad Yadav and #नीतीश Kumar joined hands together, happy Bangladeshis and Rohingyas coming to Bihar. #MuradMerali #AnjanaOmKashyap #BiharPolitics #TejasviYadav #JDU_RJD #palturam #बिहार #पलटूराम.”

Reality: The video is of Bangladesh not of India. The detailed factcheck provided here.

Social media is full with hateful and demeaning post against Rohingyas. Here we clubber some of these tweets to show the kind of hatred is there for Rohingyas.

Recently, Twin towers in Noida was demolished by the government. Rohingyas was caught in the flames of hate in this unrelated issue.

Journalist Bharat Singh Diwakar wrote, “The owner of Supertech, despite being a billionaire, could not save his property worth crores, and despite being a poor Bangladesh Rohingya, they become adored by the Supreme Court overnight. What would be the reason?” {English Translation}

There are many adjectives like demon, terrorist is being used for them. Many hatemongers like Yogi Devnath are attempting to trend #Rohingyagoback hashtag against them. 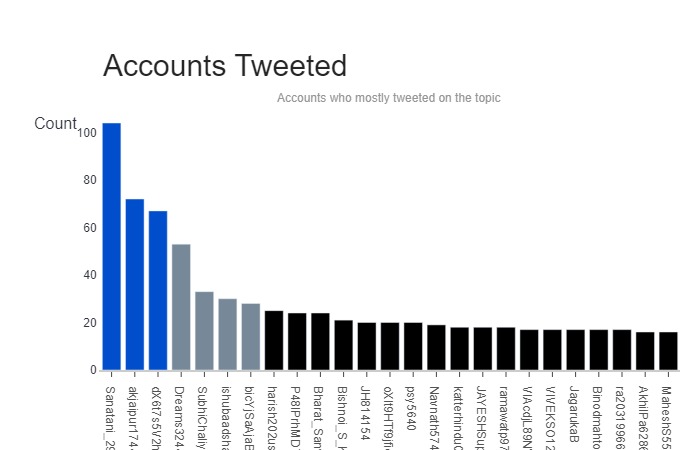 Analyzing thousands of users who tweeted on the topic, we got to know that the frequency of creating new accounts increased over a period of time. The graph below shows that 105 new accounts were created on July 2 alone, which were the highest number of accounts created in a single day. These accounts later tweeted on the hashtag. 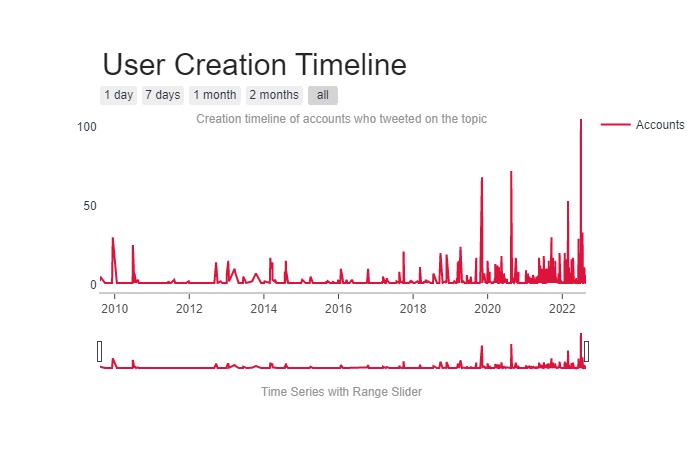 This DFRAC exclusive report highlight the hate spread all over the internet about Rohingya refugees. Many social media users are using old news to criticise their whole population. Further, many fake and misleading photos and videos regarding the same context got viral. There are many fake claims about their population in India. Moreover, there is a general perception about them they all involved in felony crimes.