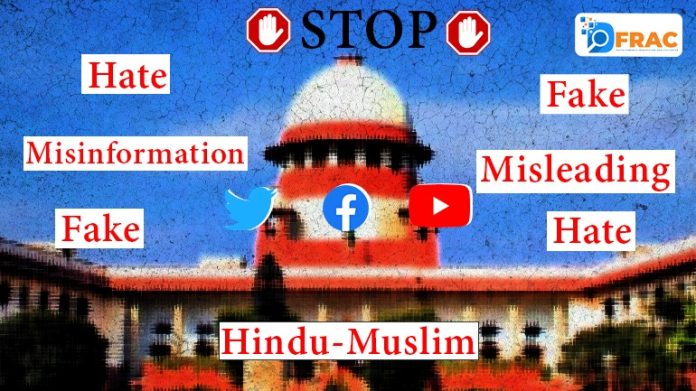 The Supreme Court has repeatedly expressed strong displeasure over reporting in a communal tone by sections of the media. The court said that such reports ultimately bring a bad name to the country. Chief Justice NV Ramana said that the problem is that a section of the media is showing every single incident in the country from a communal angle.
The court expressed concern over the fake news being spread on social media while commenting on the accountability of the web portals. The Chief Justice on numerous occasions said that no one has control over the web portal. Efforts are being made to give communal color to every news, which is a big problem.

The Chief Justice said social media platforms like Twitter, Facebook, and YouTube do not respond to judges and keep writing against institutions without any accountability. There is no control over fake news on web portals and YouTube channels. If you go on YouTube, you will find how fake news is being circulated openly. Anyone can start a channel on YouTube.

No action from social media platforms

Justice Ramana said that forget for the people, they keep writing anything arbitrary for the institution and the judges too. He said that I have never seen any action taken on Facebook, Twitter, and YouTube. They are not accountable, they say it is our right. They only answer to powerful people.

The new IT rules have been made to regulate social and digital media and efforts are on to regulate them. But so far, not much has been achieved except for instances where Twitter and the government have ended up in a slugfest.

Justice Dhananjay Yashwant Chandrachud of the Supreme Court said that the basic purpose of journalism is to gather information, views, and opinions. On the basis of these, common citizens are able to make the right decisions and make better choices. Today, in the era of fake news and false information, we need such journalists more than ever, who write about the things being hidden and bring out the flaws in society. Justice Chandrachud told the youth who are going to become journalists at the convocation and foundation day celebrations of a private university that they can become the voice of the students and the people. They can make the world better.
Justice Chandrachud said in the convocation and foundation day function of Jindal Global University, to make social justice a success, everyone has to be given equal opportunities by bringing changes. Every citizen will have to contribute to these changes, especially students and youth going to join any profession will have to work for social justice.

Way out of the dilemma

It will be a surprise to everyone that one of the frustrations in journalism has been born out of fake news dominating the digital media. Fake news is also making the war waged against the pandemic difficult. In the Corona era, the way those self-interested are spreading confusion and lies by taking the help of internet media, they do not even realize that ultimately this action will endanger the credibility of the media world doing meaningful work.
Although from Google to WhatsApp, many arrangements have been made to prevent fake news, during the Corona era, the disease of Fake News, which has deepened through the Internet media, has put the common people in the dilemma of who they believe to be right and who is wrong. Banning websites that spread fake information may be one way, but it is not the solution, as one way is closed and many other avenues open. Restrictions also put many reliable sources of information at risk. In such a situation, there is a need that on the one hand the mainstream media should strictly follow the formula of self-censorship. No doubt many responsible media do this, but this initiative of theirs has not instilled much sense of duty in the media organizations that do not do so.

Self-censorship could be the key

In such a situation, it would be better if self-censorship could be implemented to some degree as a binding system and not just as an object of request or instruction. Similarly, there is a need to create a system of regular advice and monitoring in the context of various forums of Internet media, but there it should be strictly implemented by making it lawful and binding. The objective behind creating such a system is to keep in mind the belief that people who spread enmity and spread the news with divisive agendas ultimately destroy our democratic system and create a law and order crisis. Therefore, it would be appropriate in every respect to forcibly remove any such material.
It is the misfortune of the country that the judiciary has to do what the executive is supposed to do. Still, there is hope that the journalism world will finally remember its sense of responsibility.