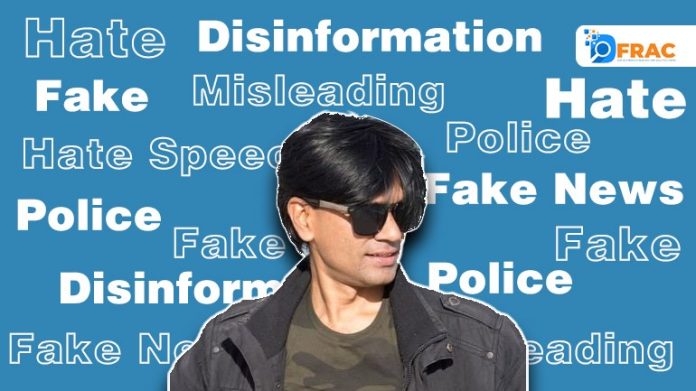 Alt News co-founder and fact-checker Mohammed Zubair was on Monday (July 4) produced in a court in Uttar Pradesh’s Sitapur in a case filed over a tweet alleging that Zubair had accused yeti Narasimhanand Saraswati, Bajrang Muni and Anand Swaroop in the purported tweet as “haters”.
A complaint was lodged with the police by Bhagwan Sharan, President of Hindu Sher Sena, a Hindu outfit, regarding Zubair’s tweet. The complaint against him was lodged on June 1. After the charge sheet was filed in the case, Zubair was taken to Sitapur by the Delhi Police. The UP Police filed a charge sheet in the court on Monday, after which he had to appear in court.

Foreign donations, the bone of contention in case
A case has been registered against Zubair under IPC section 295A and IT Act 67.
Zubair was first arrested on June 27, when an FIR was registered against him on the basis of a Twitter post, in which another Twitter handle had accused him of “hurting Hindu sentiments”. Delhi Police had called him for questioning in the case of the year 2020 but the arrest was made in this case.
On July 2, Delhi’s Patiala House Court, while canceling the bail plea of Zubair, sent him to judicial custody for 14 days. The court, while dismissing the petition, said that there is no ground to grant bail during the investigation being conducted by the Delhi Police.
Delhi Police alleges that Zubair had received donations from foreign countries such as Pakistan, Syria, Australia and Middle Eastern countries. Police say that it has to be investigated. In this regard, section 35 of the Foreign Contribution Regulation Act has been added in the FIR.

What do the police say about Zubair receiving funds?
“During social media analysis, it was noticed that Twitter handles supporting Mohammad Zubair after his arrest were from Pakistan and mostly middle eastern countries like UAE, Bahrain and Kuwait,” said the IFSO unit official. The police further said that from the analysis of the reply received from Razorpay Payment gateway, various transactions, with phone numbers or IP addresses outside India, were from locations including Bangkok, Manama, North-Holland, Singapore, Victoria, New York, England, Riyadh Region.The other locations, as stated by the police, include Baladiyat ad Dawhah, Sharjah, Stockholm, Aichi, Central, Western and Eastern Provinces of UAE, Abu Dhabi, Washington DC, Kansas, New Jersey, Ontario, California, Texas, Lower Saxony, Bern, Dubai, Uusimaa, and Scotland. “A total of about Rs 2,31,933 have been received by Pravda Media, Alt News parent company,” the police said.

Other allegations
The police have also alleged that Zubair has deleted the evidence by formatting the phone and deleting the data. There is also an allegation that there has been a conspiracy on behalf of Zubair. During the debate on the bail plea, lawyer Vrinda Grover opposed judicial custody. Grover had said that the police wanted to implicate him. And this has been done with malicious intent. She asked, “Is changing the SIM card a crime, is it a crime to format the phone?”
Also, on the receipt of funds to Zubair from foreign countries, Grover had denied in the court that the alleged money was received by Alt News Company and not this money was received by Zubair in a personal capacity. She told the court that it did not go to Zubair’s account. She further added that Alt News is a company operated under Section 8 of the Companies Act and the money went to the company and not to Zubair.

Clarification by Alt News
Alt News had also issued a statement on receiving donations from abroad and said that the platform through which we take donations does not give us the option of receiving funds from foreign sources. According to Alt News, he took money only from Indian accounts and the money was deposited in the company’s bank account.

Journalists opposing the arrest
Many journalist organizations have opposed the arrest of Zubair. On Monday, some senior journalists gathered at the Press Club of Delhi and protested against the police action on journalists. Press Club of India President Umakant Lakheda told a news channel, “We believe that any journalist who is doing journalism is not running any gang, no media is running gang, no one is wielding weapons. You are treating him like a dreaded criminal, not only Mohammad Zubair but there are many journalists in the country on whom such swords are being hanged. By implicating them in false cases the journalists are made to fear the government, which wants to censure the truth. The truth that many journalists dedicate their life to. They can’t show it, can’t report it.

India stumbles on Press Freedom ranking
The law must take its course in the case, whether the charges are on journalists or otherwise, but at the same time the government and various law enforcement agencies are duty-bound to see that nobody is victimised due to religion, profession etc. India’s latest ranking in the World Press Freedom Index has dropped eight places from 142 to 150. Barring Nepal and China, the ranking of all its neighbors has also fallen. Therefore, the government must exercise its powers and obligation to keep the flame of law buring, very carefully.
Nordic countries top the 2022 Press Freedom Index. Norway is at number one. It is followed by Denmark (2) and Sweden (3). Estonia is at number four and Finland at number five.
North Korea is placed at the bottom of the list of 180 countries. Russia has dropped from 150 to number 155, while Ukraine is at 106.
Nepal has jumped 30 places in the rankings this year to be at number 76. Last year it was at number 106.

Condition of India’s Neighbours
Pakistan is at number 157. Sri Lanka’s ranking is 146, Bangladesh 162 and Myanmar 176. China’s condition has improved two places and it has come to number 175.

New era of polarization
Releasing the rankings, Reporters Without Borders said that a new era of media polarization has begun in the world, i.e. the division among the indigenous media institutions has become very clear and sharp.