Fact Check: Reality Of The Video Which Got Viral After The Delhi Riots On Hanuman Jayanti.

After the communal violence video in Jahangirpuri, Delhi on the eve of Hanuman Jayanti social media is full of hateful posts. One such video of a procession is getting viral on the internet where people are asking for stricter police action after the Delhi riots. Further, along with the video, Manoj Parihar asked for a bulldozer baba in Delhi in the caption. 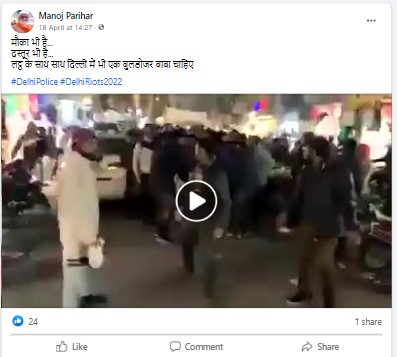 Similarly, many people have shared this video on their social media handle.

On reverse image search, we found the same video on YouTube on the channel of Local Walk. The video was uploaded on 23th December, 2019 with the caption, “Support to CAA.”

Therefore, the video is old and have no relation with the ongoing communal riots.Further, digging deeper into the matter we found out that the video is not of Jahangirpuri but it is of Laxminagar.

Moreover, we found the same video on the Twitter handle of @jawaharyadavbjp. He posted the video on 26th December, 2019 with the caption, “The rally in Haryana is slightly different from the rallies in the country. “Modi ji, you play the stick, we are with you.”

Therefore, the viral video is old. And, the claim that this video is related to the recent communal violence in Delhi’s Jahangirpuri is wrong.

Previous articleFact Check: Has Tennessee legalise child marriage?
Next articleFact check: Did the Muslim women of Khargaon got arrested for stone-pelting the Hindu?