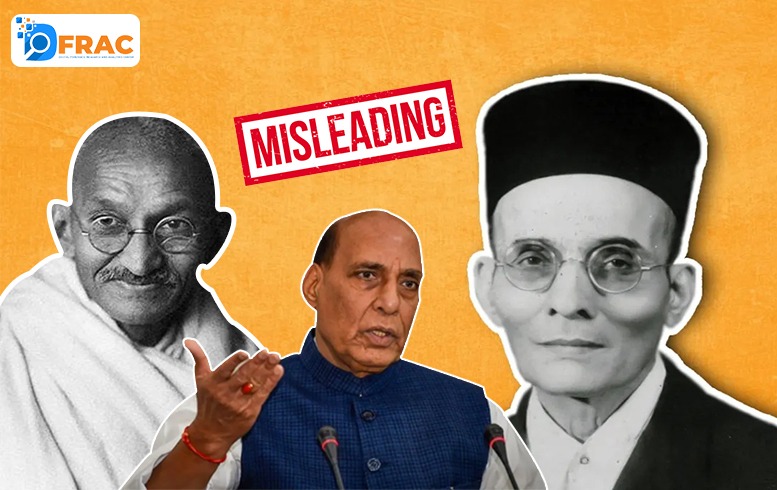 On October 13,2021, at the book launch of “Veer Savarkar: The Man Who Could Have Prevented Partition” written by Uday Mahurkar and Chirayu Pandit, the Defence Minister of India, Rajnath Singh addressed the gathering and spoke for a few minutes.

Upon addressing connections between Savarkar and Gandhi, Rajnath Singh said the following, “Lies were spread about Savarkar. Time and again, it was said he filed mercy petitions before the British government seeking his release from jail. It was Mahatma Gandhi who asked him to file mercy petitions.”

Singh was perhaps referring to all the documentation from the cellular jail where Savarkar spent a considerable amount of time. These documents portray him as a British apologist because of the letters he wrote.

The first petition Savarkar wrote was in 1911 for his remand but this petition was rejected. The second petition filed by him was in 1913 as documented by R.C Majumdar in his book Penal Settlements in Andamans. In the letter, Savarkar asks for ‘mercy’ and promises cooperation with the British government.

It must be noted that Gandhi could not have had anything to do with these petitions as he was still in South Africa. Gandhi did write a letter to theSavarkar brothers in 1920 but it makes no mention of mercy petitions. Gandhi asked the brothers to frame a brief petition ‘setting forth the facts of the case bringing out in clear relief the fact that the offence committed by your brother was purely political’.

Savarkar nonetheless filed for a mercy petition seeking clemency, promising to tread the Constitutional path and saying, “Such an Empire as is foreshadowed in the Proclamation wins my hearty adherence”.