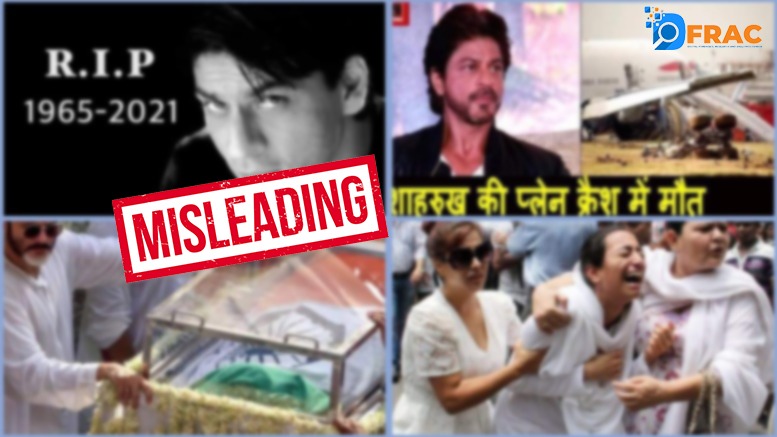 Recently, some images have been circulated across some websites and social media platforms claiming that Bollywood superstar Shah Rukh Khan died in a plane crash.

This claim was circulated across the internet after the superstar’s son was arrested for drug case on 2nd Oct, this month.

Multiple websites have posted this article claiming Shah Rukh’s death. All sharing similar kinds of photos. These articles also got shared on Facebook with almost 300 shares.

After doing some reverse image searches on the topic, we found out this claim to be false and misleading. As the photos circulating of the superstar Shah Rukh Khan are old.

Among the other pictures, there was one photo of Bollywood superstar Anil Kapoor paying tribute to the dead. But this image of him considered as misleading as the picture is from the Indian actress Sridevi’s funeral.

Hindustan times shared this image with the headline “Sridevi death: Anil Kapoor thanks Mumbai police for being supportive”.

Another image that was shared was from the Indian actress Jiah Khan’s funeral in 2013.

This photo was also published by The Mirror with the headline “Jiah Khan: Bollywood star found dead by mother in Mumbai home”.

With our proofs it clearly shows this claim was nothing but a fake and misleading act on the Bollywood actor Shah Rukh Khan. Although, similar hoaxes have been circulated since 2017 and is also reported by The Indian Express.