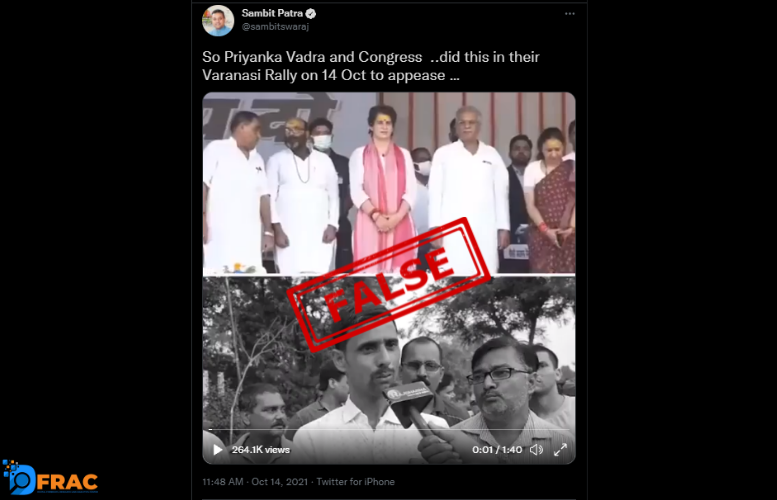 On October 14,2021, Sambit Patra, National Spokesperson from BJP posted a video of a Congress rally led by Priyanka Gandhi Vadhra. In the video it can be seen and Vadhra and a few senior leaders are standing on the podium while azan is playing in the background.

Patra claimed that that Vadhra purposefully played the azan at her Varanasi rally on October 14 to appease to the muslim community.

Upon performing some reverse frame searches and keyword searches we happened to find the same video posted by the official youtube handle of INC. The video however was taken on October 10 at the Kisan Nyay Rally and not October 14 as Patra claims.

We watched the entire video and found that prayers from all major religions were recited in the rally.

A congress worker can be heard saying “First of all, as it has been our tradition… Congress party has always believed that all religions are equal.. So first of all I would request my friend from the Hindu religion who have come here to recite the mantras … then our Muslim brothers, then our Sikh brothers and then the Christian brothers will welcome from there and then come over here and meet” at the 0:58 timestamp.

The video has been clipped by Patra to show that only azan was played at the rally. Therefore, this claim is false.