HomeFact CheckFact Check: #AntiIndiaCongress trends on Twitter with many misleading facts and altered...

Fact Check: #AntiIndiaCongress trends on Twitter with many misleading facts and altered images 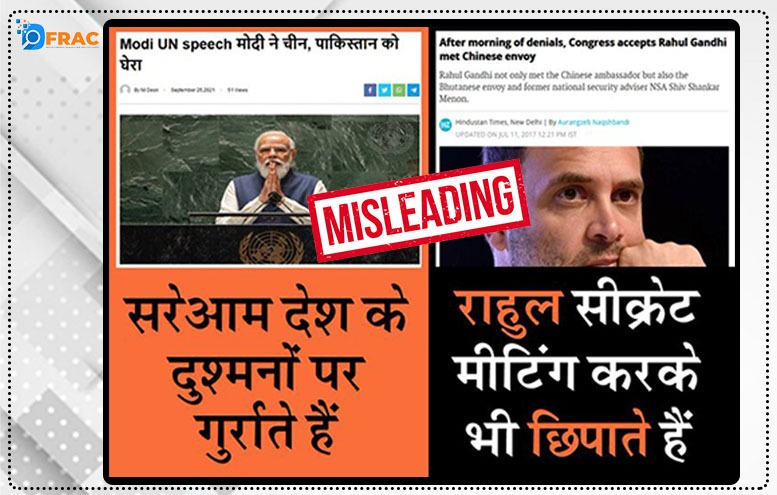 On September 30,2021, #AntiIndiaCongress started to trend on twitter. Within this hashtag, the users targeted the INC and their decision to induct Kanhaiya Kumar into the party.

As of when this piece was being written, the hashtag had a whopping 27,000 tweets within it.

Some verified handles also used the hashtag most notably, Yogi Devnath, who as per his bio is a member of the Akhil Bharat Saadhu Samaj. Devnath actively asked others who supported this cause to voice their dissent and get the hashtag trending on twitter.

Along with general hate and criticism directed towards Congress and Rahul Gandhi, we noted a lot of fake news and misleading facts floating around within the hashtag.

The graphic claims that Modi attacked China and Pakistan in his UN speech whereas Rahul Gandhi met with a Chinese envoy.

The graphic was also shared by many others claiming the same thing.

Upon researching the first claim i.e. Modi attacking China and Pakistan in his UN speech we found various news reports of the speech giving a detailed account of Modi’s speech. Modi in his speech does not mention Pakistan or China even once in his speech. There were some subtle nods to the two countries whether it be the origin of the COVID-19 virus or extremism but Modi used the majority of the speech to highlight India’s achievements in combating the virus and climate change.

Additionally, a point to be noted that in the graphic the date of publishing of the article seems to be September 25, 2021 which means that the author wrote this article after Modi’s speech at the UNGA assembly itself.

We did perform on a search on the article written on Rahul Gandhi and indeed found the article published by Hindustan Times. But the article was posted in 2017.

Since Modi did not attack Pakistan and China in his speech at the UN and the fact that it is put in comparison with a 4 year old fact, this claim is misleading.