Fact-Check: Woman not allowed inside restaurant for wearing a saree, twitter users boycott the restaurant. But is it true? 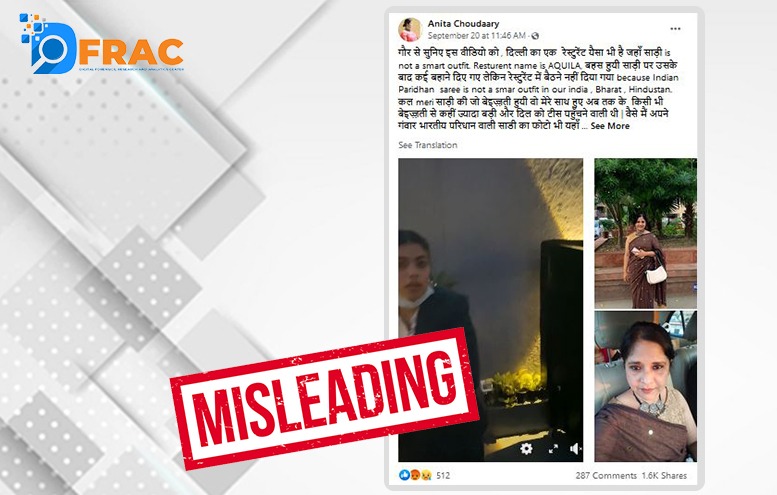 On September 19, a woman named Anita Choudaary and her family arrived at an upscale restaurant named Aquila in New Delhi’s Ansal Plaza. Upon their arrival, there was a big scuffle, a 10 second video of which was posted by Choudaary after the encounter.

In her criticism of the restaurant, Anita posted a video of an employee of the restaurant saying that,“We only allow smart casuals and saree does not come under smart casuals” pointing to the saree Anita was wearing. Anita went online to complain about the situation and the story soon went viral .

Many users took to social media to criticize the restaurant for their policy stating that the woman was discriminated against just for wearing a saree. Some even posted pictures of PM Modi interacting with US women of Indian origin who greeted Modi in saris saying that while this is a symbol of culture abroad, it is not allowed here in India.

Upon researching the claim, we found that in a longer video posted by Prabhakar Kr Mishra, another male employee of Aquila can be seen saying that rights of service are reserved and that they cannot serve them as their daughter is underage.

Owing to the massive backlash against their restaurant, Aquila released an official statement concerning the matter and even talked to Indian express about it.

Here is their statement:

Aquila said that the guests did not have a reservation and were asked to wait while a table was arranged for them. But the guests could not wait and entered the restaurant and began arguing with the staff. They also apologized for the behavior of their female staff who said that sarees were not allowed and also said that the clip posted by Anita was part of an hour long conversation. They also posted footage of Anita slapping the staff. They also posted footage of women dressed in sarees who have previously been served at the restaurant. Another reason they were denied entry was because their daughter was under the age of 21.

Since the argument had so much more context than the woman not being allowed to enter because she was in a saree and there is clear evidence of violence and unruly behavior from the guests, the claim is misleading. The issue was however blown out of proportion when prominent leaders of the BJP party such as Vanathi Srinivasan and Shefali Vaidya took part in the effort to malign the restaurant without looking at the full context of the situation.