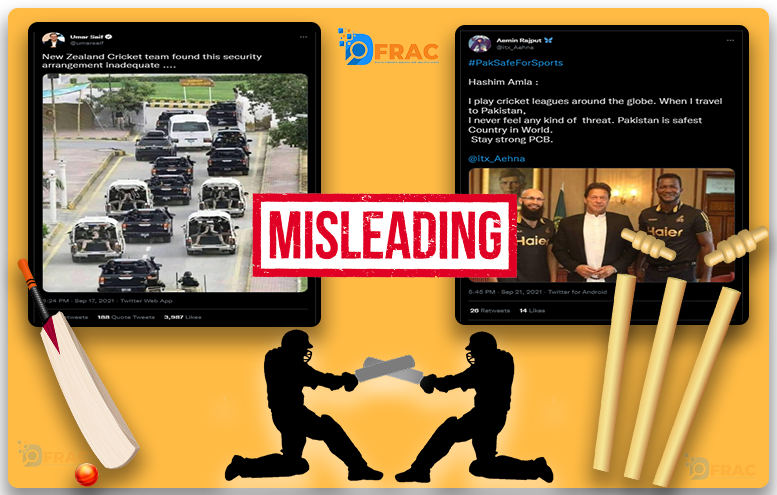 On September 17,2021 Umar Saif, the chief digital officer of a Pakistani media group posted an image of a security convoy and questioned why this was not adequate for the New Zealand Team.

The image was posted on the same day when the cricket team of New Zealand decided to pull out of their tour of Pakistan citing security concerns.

This was a blow to Pakistan, which has been trying to get home international matches to take place in the country. Matches were almost completely halted after the cricket team of Sri Lanka was attacked in 2009.

Upon reverse searching the image on google, we found that this image was posted by many news media outlets in 2019 when the Sri Lankan team were given a massive security protection.

This claim is therefore fake.

On September 21,2021, a twitter user named Aemin Rajput claimed that the South African cricketer Hashim Amla has given a statement that he has never felt threatened by playing in Pakistan.

Upon researching the statement, we found that no such statement was made by Amla. Additionally, the image used on the tweet is at least as old as March 2020.

Pakistani news media outlets had reported on this meet between South African players with Pakistani PM Imran Khan in March,2020.

This user’s claim is therefore fake.

More fake news has come out of Pakistan after the announcement of multiple cricket teams withdrawing due to safety reasons. We previously fact checked a claim spread by Pakistani users who used an old video of Chris Gayle saying that “Pakistan is one of the safest countries in the world”. You can read the fact check here.

Another morphed tweet claimed to be New Zealand batsman Finn Allen who supposedly tweeted that Pakistan is completely safe and peaceful, however India Today found that this was morphed.