HomeHashtag ScannerDFRAC Exclusive: Analysis of hate against Hamid Ansari after the claims...

DFRAC Exclusive: Analysis of hate against Hamid Ansari after the claims of Pakistani journalist Nusrat Mirza. 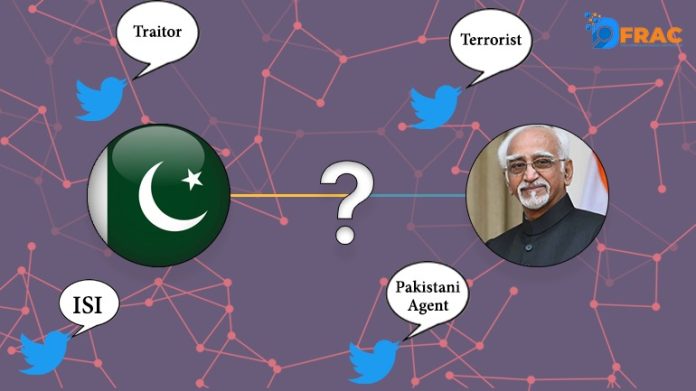 Along with many claims like the U.S. was responsible for the earthquake in Pakistan and the tsunami in Japan, Pakistani journalist, Nusrat Mirza made a claim that he had spied in India and was invited by Vice President Hamid Ansari. Further, he also claimed that he had passed on sensitive information collected here to during his five visits in India to his country’s spy agency ISI. It is noteworthy that there is not credibility of all these statements of Mirza.

Nusrat’s purported comment that he had visited India on Ansari’s invitations and also met him caused a full-fledged fierce debated on the topic that Whether or Whether not the former Vice President Hamid Ansari invited Nusrat Mirza?

Furthermore, along with this many other questions also arise. Like Did Hamid Ansari knew Mirza already? And, even if he knew him also, he knew about his real that Mirza was here for espionage? Had security agencies any information regarding India being spied by a Pakistani journalist? And, above all the major question is that the statements of Pakistani journalist Nusrat Mirza is true or not? Or, he was just boasting around the way he said, “we are Mughals. We have ruled India for centuries. I understand their culture. I know about their weaknesses.”

Whatever may be the truth, this issue triggered the social media also. And, the hashtags related to former President started trending on Twitter. The most trending hashtag of #HamidAnsari includes, #HamidAnsariExposed, #NusratMirza, #Pakistan, #ISI, etc.

The below graph talks about the timeline of the hashtag of #HamidAnsari. The graph shows that the hashtag started from 11th of July and has a peak on 12th July with more than 2,800 tweets and 2,000 replies. The trend then decreased gradually.

Verified accounts Who Tweeted along with the Hashtag

3557 non verified and 133 verified users have tweeted along with the hashtags. Though some were in support but maximum were critical toward the former Vice -President.

After the claim of Mirza, many old incidents are presented in a way to question the loyalty of Vice president Hamid Ansari. Like photos from the past are going round on the social media sites with the claim. An image of 66th Republic Day was shared on the internet targeting Mr Ansari. He was in the past also was blamed for not respecting Indian flag. When people Priti Gandhi cruised him for not saluting the National Flag while National Anthem was played.

Now, people are again sharing the same pictures and questing his loyalty towards the Nation.

Realilty: As per the protocol, when the national anthem is played, the Principal Dignitary and those who are in uniform take the salute. Those in civil dress stand in attention. “During the Republic Day Parade, the President of India, as Supreme Command.  the President of India, as Supreme Commander, takes the salute. As per protocol, the Vice President is required to stand in attention,” The office of Hamid Ansari at that time had to release an official statement for the clarification of the issue.

In the statement they also highlighted that “When the Vice President is the Principal Dignitory, he salutes during the national anthem, wearing headgear, as done at NCC camp that year.”

In another such tweet, a Twitter user BHK wrote in a tweet, “Do you know that Hamid Ansari is a grand -nephew Mukhtar Ahmed Ansari who was the president of Muslim League in 1918 and 1920 and outspokenly supported the Khilafat movement, in which hundreds of innocent Hindus were massacred?”

Soon this tweet gone viral on the internet in which Hamid Ansari’s grand uncle was criticized for being a part of the Khilafat movement. And, the user also wrote that hundreds of Hindus were massacred in it.

Khilafat movement had nothing to do with Hindus. It was started against the Britishers after Caliphate was abolished in Turkey. In 1919-1922 both the movements namely Non-Cooperation and Khilafat Movement were organised under the leadership of Mahatma Gandhi to oppose British rule in India. Despite for having different cause for the movement both the movement adopted non-violence.

And, Mukhtar Ansari became the President of the Indian National Congress in 1927 on the invitation of Mahatma Gandhi, he spent all of his wealth for the Indian National Congress activities, which left him almost bankrupt. He spent his later life in writing and developing the Jamia Milia Islamia. Ansari Road in Daryaganj, old Delhi is named after him.[6] Ansari Nagar near AIIMS, New Delhi has also been named after him.

Therefore, this viral tweet amidst the Hamid Ansari controversy which have potential to trigger communal hatred is misleading.

The below wordcloud shows what were the words that were used majorly in the hashtag of #HamidAnsari. Some of the words include, “Traitor”, “Pakistani”, “ISI”, “Jasoos”, etc.

After analysing more than 3,000 users, it came to notice, that most users were created in the month of June and July this year. Almost 20 and 15 accounts were created on 7th June and 2nd July who all tweeted on the hashtag.

Also Read: Celebrations and trolls by China after the death of Shinzo Abe.

Hamid Ansari said that he has never invited or met the Pakistani journalist Nusrat Mirza. He dismisses all the allegations made on him by calling them as litany of falsehood” Even though, the leading Party spokesperson backed the claim of the Pakistani Journalist Nusrat Mirza with a photo of Mr. Ansari and Mirza sharing a platform together, Mr Ansari still deny to have known Nusrat Mirza. And, there is no strong proof against former Vice president.  But there is a rage against him on social media.