HomeHashtag ScannerDFRAC Exclusive: Celebrations and trolls by China after the death of Shinzo...

DFRAC Exclusive: Celebrations and trolls by China after the death of Shinzo Abe. 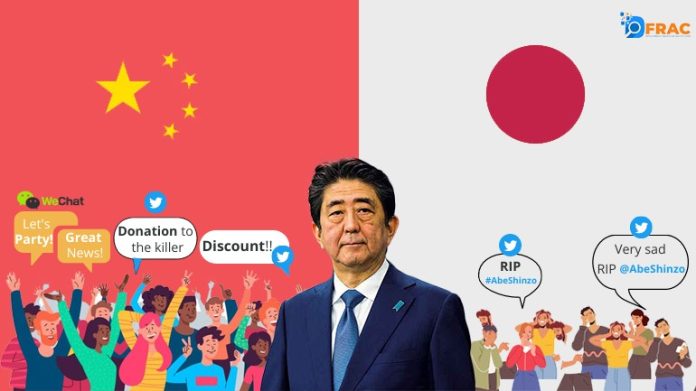 Shinzo Abe, the longest-serving prime minister of Japan was shot on 8th July during a campaign. And, died soon after taking to the hospital. The reason behind his assassination is still unclear. Almost all the countries have expressed their condolences on this huge loss of Japan. On the other hand, people in China started celebrating this incident which is hurtful to the rest of the world. In this DFRAC Exclusive, we will analyze the joyful reactions on Chinese social media over this sad incident.

Most of the Chinese media outlets Xinhua, People’s Daily, and the English-language China Daily remained neutral while covering this incident. On the contrary, the Chinese state-owned Global Times as usual used a sarcastic approach even on this sensitive issue. In a Tweet it wrote, “The attack on Abe will certainly provoke the Japanese right-wing. Abe’s successor and supporters may seize the incident to push his “free and open Indo-Pacific” and active participation in the QUAD, and facilitate #NATO‘s entry in East Asia: observer.” 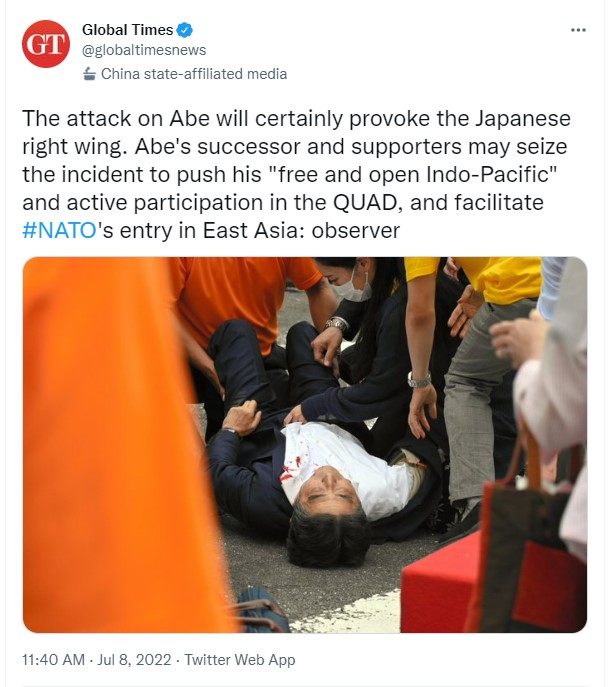 Chinese celebrating after the news of Shinzo Abe was shot!

As soon as the news came out that a man shot the former Prime Minister of Japan, a wave of celebrations ran in China. Consequently, Chinese social media app WeChat was flooded with happy message and celebrations. We have picked up some of the posts with translated or Transliterated WeChat screengrabs to show the happiness of China on this sad incident.

Further, not only on the social media but people are offering discounts in restaurants and lottery tickets. Many memes related to this incident have also come out. Above all, many Chinese users have called the shooter ‘Hero’.

Offering discount in the restaurants

Many restaurant owners have offered several tempting discounts to celebrate Shinzo Abe’s death. A restaurant put a banner outside that says, “to celebrate #Abe’s death, we will offer Buy One Get One Free for our milk tea for three days.”

The slogan of a lottery shop of the Communist Party of China: only for today was, “I’m so happy today that former Japanese Prime Minister Shinzo Abe was shot to death. Let’s celebrate. Anyone who buys in the store today will receive a refund of 8.8 yuan for every 100 yuan. July 8, 2022.”  Similarly, another tweet highlighted, “an hour within Shinzo Abe’s assassination, somewhere in China already put up a promotional message saying “To celebrate Shinzo Abe’s assassination, buy a lottery ticket day get a SCRATCH free”.

Many social media users in China gave laughing reactions and made jokes on Shinzo Abe. One of the ridiculous jokes was, “US president Kennedy meets with Japanese Prime Minister Shinzo Abe.

Targeting to President of Taiwan

Some rogue Chinese social media users have targeted Taiwan President, Tsai Ing-wen. In one such post a user wrote, “Your master was assassinated. Be careful! Similarly, another such tweet was, “Next will be you Caicaizi

There were many parties and consorts were on the eve of Shinzo’s death. Posting a video apparently of a consort and with Abe’s photo at the back, social media user @remonwangxt wrote, “It’s even lower than when it was 9/11. Decades have passed, and this country has not only failed to grow, but also owed more.”

China’s very first official reaction over this news was that, it’s a very socking news. Verified twitter account of @MFA_China even tweeted, “We are shocked by what happened to Japan’s former Prime Minister Shinzo Abe. Our thoughts are with his family.” But,  the happiness of Chinese netizens, has not been hidden.

In this report we have covered, how Chinese people celebrated the death of a great leader Shinzo Abe. Instead of sympathy, the Chinese social media was filled with joyful and sarcastic comments. In addition, there were discounts offered in several restaurants to celebrate. Moreover, there were many concerts and parties after the Abe’s death.

DFRAC, in the past also have covered many Chinese hateful agenda in our exclusive reports and will continue to do that. Here are some of our reports analysing China’s hateful narratives.