Fact Check: IS AIMIM is actually surpassing other parties in UP Election Exit Poll? 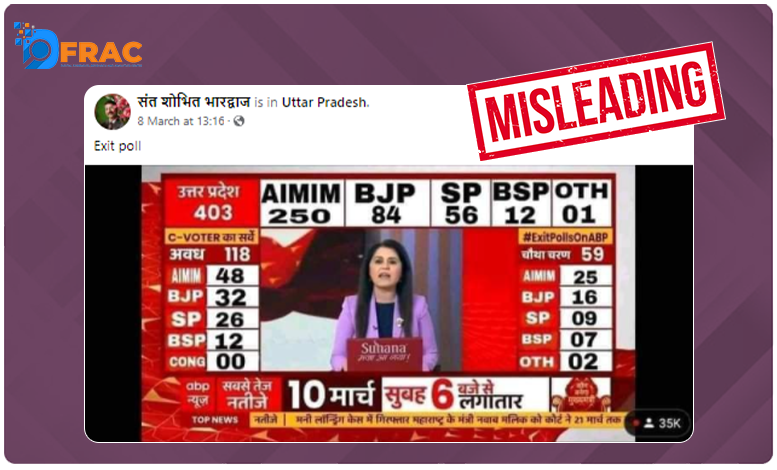 Today i.e. 10th March is the day of fate for all the political parties involved in UP Elections. Since morning every news channel is showcasing the exit poll results on their respected channels.

In between all this hustle-bustle, much fake news is also trending on different social media sites.

We came across a picture on Twitter by @ShubhamSinghOn2 showcasing the results of the exit poll under the caption, “This is the best Exit Poll.”(Hindi Translate)

In this picture the maximum number of seats were shown to be of AIMIM (All India Majlis-E-Ittehadul Muslimeen) Party, with BJP (Bharatiya Janta Party) on second with 84 seats following SP (Samajwadi Party), BSP (Bahujan Samaj Party), And OTH with 56, 12, 01 respectively. 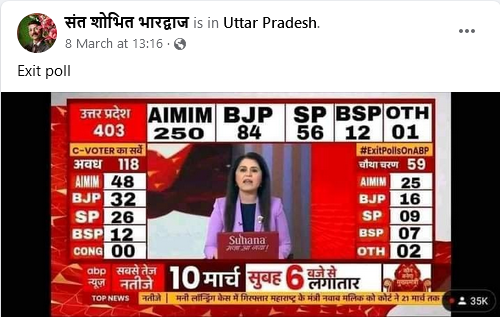 As all the news channels since morning is updating the people with the exit poll results.

So a video was shared by ABP News on their official Twitter account showcasing the real exit poll results.

From the above picture and video, we can see that the picture above is morphed and is far away from the reality grounds.

The picture shared on different social media is morphed one and is far away from the ground report.

Claim Review: AIMIM is actually surpassing other parties in UP Election Exit Poll

Previous articleFact Check: Did CNN Post A Story Of “The Karkhiv Kid Finder”?
Next articleChinese Reaction to Nepal’s MCC agreement with the US